My sister-in-law is getting married in a couple of weeks, and my mother-in-law asked me to help bake for the Sunday brunch on the day after the wedding. I am happy to, of course, and have been thinking about how to get most of the work done ahead of time . . . the complication: my in-laws (where the wedding will take place) live a 19-hour drive away.

I asked for help on our Mellow Bakers forum, and was pointed over to Frieda's website and her post about brown-and-serve rolls, which multiple people have tried with success. Frieda's recipe is for making dinner rolls ahead of time, parbaking them, storing them in the fridge for a week, and baking them before eating.

I needed to make cinnamon rolls a few weeks ahead of time, freeze them, and then bake them. I made a double-batch of the BBA cinnamon rolls for our end-of-school breakfast, and held six rolls back. I had a couple of disposable aluminum pans in the cupboard, so I shaped the cinnamon rolls and then placed three in each pan. For one pan, I wrapped it well in plastic wrap and then aluminum foil, and then put it in a zip-top bag and stuck it in our deep freeze.

For the other pan, I used Frieda's instructions as a guide, parbaked the rolls at 300 F for 15 minutes, then let them cool, wrapped them, and put them in the deep freeze.

And the results (parbaked on the left, frozen raw on the right): 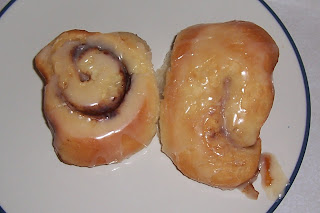 I was surprised by how different the two sets of rolls looked; I think the parbaked ones (on the left) look neater and tidier. Taste-wise, they would both be very acceptable to serve and people would be delighted with them; clearly, either method works. Evaluating the texture more closely, I think the parbaked ones taste like they were reheated day-old cinnamon rolls, while the frozen raw ones taste like fresh-baked, just out of the oven cinnamon rolls. Which is good because that method is certainly the easier of the two.

So this weekend, I will be assembling trays of cinnamon rolls and then packing them into the deep freeze before we head out west next week. And we'll see how the experiment does when taken on the road!
Posted by Abby at 12:15 PM