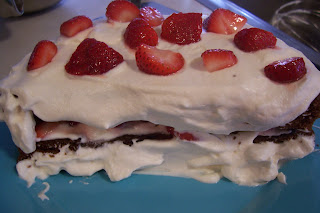 Knowing how busy this school year will be, if I need to bake something sweet, I try to grab a recipe from Nick Malgieri's Modern Baker, even if it's not from the section we're technically on. I figure I need to get a head start if I'm going to have a chance of baking most of the recipes from the book for our Modern Baker Challenge.

So this weekend, I needed a multi-purpose cake to celebrate my nephew's fourth birthday (it's his second birthday party, so not his main cake), my stepdad's sixty-fifth birthday, and my mom and stepdad's anniversary. My sister requested chocolate, so I went browsing through the cake section of the book. There were a few chocolate recipes, but upon investigation, I realized that I only had unsweetened chocolate in my house (very uncharacteristic for me), which was the chocolate called for in the devil's food cake recipe. I remembered that Andrea (at Family and Food) had made this cake when she received the cookbook, so I read her notes: the frosting was too sweet and too much, but overall, a tasty cake.

I didn't want a giant cake with tons of leftovers, as everyone in the family is trying to eat more healthfully. I decided to make a half-recipe, cut the one layer in half, and just make a shorter cake.

The recipe was easy enough ~ not nearly as easy as the quick breads (the section we just finished), but not too complicated. Mix dark brown sugar with softened butter and vanilla. Add eggs and melted chocolate. Then mix in the flour mixture, alternating with milk, and mix the whole thing for a few minutes. I poured the batter into my prepared pan and cooked it for 25 minutes. When I took it out of the pan . . . it was tiny. Only about an inch thick, maybe . . .? Definitely not big enough to split in half horizontally. Hm.

So I decided to cut the cake in half vertically and make half of a layer cake. Remembering Andrea's notes about the frosting, and knowing that egg white and sugar-based frostings aren't my favorite anyway, I decided to try Nick Malgieri's variation which is listed under the recipe. I made a third of his simple whipped cream recipe (heavy cream, sugar, and vanilla) and macerated some strawberries, which I put in between the layers and on top of the cake. Once I put the whipped cream on top, I really liked the unfinished look of the cake, without the sides frosted, so I left it. Guess it felt arty to me. ;)

And then I showed up to the party and found that there were many more guests than we'd expected. Argh! Why didn't I make a whole cake?! Nevertheless, I cut the cake into thin slivers and served it with ice cream. It met with rave reviews. Hubby called it "the best devil's food cake I've ever had."
Posted by Abby at 7:45 PM