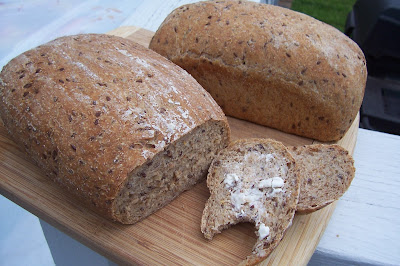 It's August 1st, and I'm already baking the first Mellow Bakers August bread . . . can you tell I missed my kitchen?!

The three Mellow Bakers' August breads are five-grain, poolish baguettes, and 40% rye with caraway. I feel like we just did a baguette and a rye (because we did), and I really, really love multi-grain breads, so it was a pretty easy choice.

This bread uses grains for 40% of the flour weight. Late last night, I prepared a soaker of rolled oats, flax seeds, wheat bran, and cornmeal.

This morning, I mixed the soaker with bread flour, a tiny bit of vital wheat gluten (Hamelman called for high-gluten flour), whole-wheat flour, rye flour, safflower oil, eggs, salt, yeast, and water. The recipe makes three loaves, which seemed excessive for a week in our house, so I made 2/3 of the recipe. After mixing for several minutes, the dough seemed really sticky, so I added in a bit more bread flour. In retrospect, although the dough looked like sticky batter, when I pulled it out of the bowl, it definitely had gluten development and was workable . . . I believe I could've made do without adding the additional flour (although I didn't add much, so I don't think it hurt anything).

Hamelman says that this dough favors overnight refrigeration, so after kneading, I stuck it in the fridge, degassing it a few times and giving it a stretch-and-fold after an hour. Even with all of this, the dough was still exploding out of the bowl every time I opened the fridge. I didn't actually leave it overnight, but just for the day (how would the dough know that it was 8am - 3pm instead of 11pm - 6am?).

This afternoon, I let it come to room temperature for about an hour, and then formed it into two loaves: an oblong for my oval banneton and a sandwich loaf, knowing that's how we'd use most of the bread. These rose for 1 1/2 hours and then went into a 460 F oven. The bread in the loaf pan was finished after 25 minutes, and the free-form loaf after 30 minutes, both registering about 195 F.

I loved the texture of this bread, and I think that it will make fantastic sandwiches. I'm curious about how the kids will respond . . . they usually don't like the texture of seeds or nuts in things. The rye flavor was more dominant than I expected, and I might substitute it with more whole wheat flour next time. Although I really enjoyed the taste of this bread as-is, I also think it will be a really fun recipe to experiment with ~ using different whole grains and flours. This is definitely a keeper!

Check out the other Mellow Bakers' August breads!
Posted by Abby at 8:28 PM