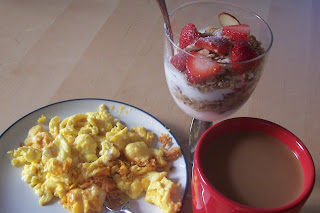 I have been dreaming about making my own yogurt for over a year now, since before I started baking bread or writing a cooking blog or spending every waking hour reading food blogs and thinking about cooking (well, maybe not every hour). As soon as I learned that it was possible to make homemade yogurt, I was intrigued. It's one of those things like vanilla extract or butter that I just never realized was possible to make from scratch. (Dumb, huh? Clearly everything can be made from scratch. But I'd just never thought about it.)

Although I bookmarked about 5 different articles, I never got around to actually trying it, and once the school year started, life just got too busy.

So here we are in August again, and I know that's now or never (or at least not until next summer). I found about a billion different recipes to make yogurt, all slightly different from one another. Which was both frustrating ~ how do I know what the right way is?! ~ and also kind of freeing because it means there isn't really one right way. Right?

I used a bunch of different references ~ this article at 101 Cookbooks, this article from the NY Times that Sara (Three Clever Sisters) referenced, my new Mark Bittman How to Cook Everything book, this post from Frieda (at Frieda Loves Bread) ~ and then just did what made sense to me.

1. I purchased a 1/2 gallon of 2% milk and a small container of plain, whole milk yogurt.

2. I sterilized 4 pint mason jars by putting them in boiling water for 10 minutes; some places mentioned this step and others didn't, so I decided to do it to be on the safe side. 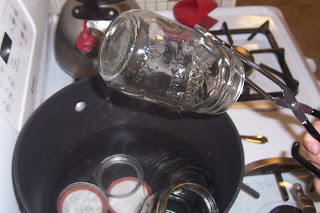 3. Meanwhile, I gently heated my milk in a large saucepan until it registered 185 F. This was definitely the most time-consuming part, requiring the most attention, especially as I started to get close to 180 F. I knew that you couldn't let it get much over 185 F or you could damage the milk. I stirred the milk occasionally, although again my sources were mixed as to whether this step was necessary. 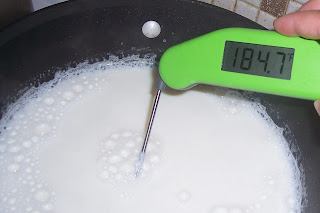 4. Once there, I turned off the heat and let the milk sit. While giving it another stir, I noticed a skin, which I didn't remember reading about. I wasn't sure what to do with it; in the end, when I poured the milk into a liquid measuring cup (for easier pouring into my jars), I just used a fine mesh strainer to get rid of the skin.

Once combined, I stirred the mixture into the big cup of milk. (Again, my sources disagreed on the exact temperature to cool the milk to, as well as the amount of starter yogurt to use. As for the starter, they were very varied: from 1/4 cup per 1/2 gallon milk to 1 cup per 1/2 gallon milk. I decided to split the difference and use 1/2 cup.) Then I poured the milk into my four waiting jars, which were still warm. 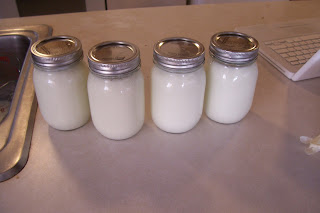 6. These I placed into our smallest cooler. I heated our rice sock for 2 minutes in the microwave and put it in the cooler. Then I covered everything with a towel, closed the cooler, and set the timer for 6 hours. 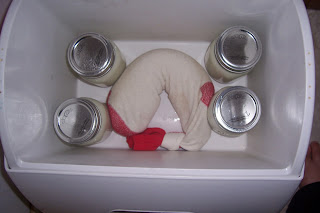 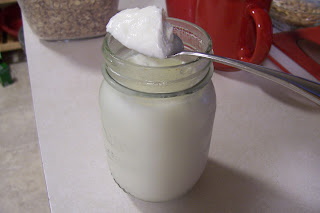 7. 6 hours later, when I opened it, the cooler only registered 85 F, but when I opened one of the jars, I found that the yogurt had indeed set and that the yogurt itself was registering 101 F. So I think this warming method works pretty well, although I might reheat the rice sock once next time. We took a teeny tiny taste (tasted like plain yogurt!), hubby finally admitted that my project was pretty cool, and we put the jars into the fridge overnight.

8. This morning, we tried it. It is the best plain yogurt I've ever had ~ by far. It's slightly sweet, with no tart aftertaste.

I tried to make strawberry yogurt by blending strawberries and yogurt with my immersion blender, but it just made a shake and didn't hold the consistency of the yogurt. So we had parfaits with the plain yogurt instead. (Of course I'd had to make homemade granola as soon as my yogurt project was in process: my new favorite granola recipe (from the King Arthur website.) I was shocked to discover that it didn't even need any added sugar ~ even with my massive sweet tooth! Delicious! 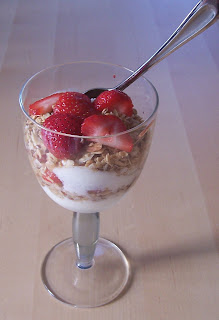 Plain, the texture was perfect. Once I added fruit, however, it became too liquidy for my taste. So I started the process of draining my yogurt (Mark Bittman's instructions can be found here). 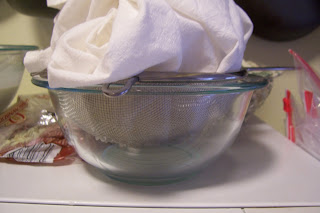 And I figure I can try Joanna's idea (from Zeb Bakes) and use the drained whey in my next batch of sourdough!

All in all, I consider this experiment quite a fun and tasty success!
Posted by Abby at 8:17 AM