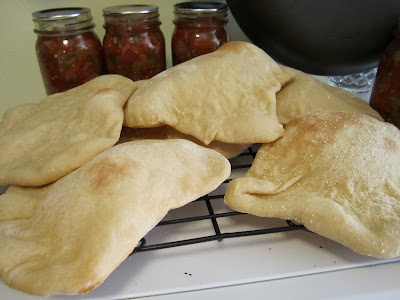 A couple of my girl friends and their babies were coming over for a last-hurrah-before-school-starts lunch today, and I needed something easy to prepare, preferably ahead of time.

Aha! I thought. My all-time favorite curry chicken salad served in the pita bread from The Modern Baker. Problem solved.

This was both the easiest recipe ever and the most frustrating. It's a quick day-of bread with only one rise and a few rests.

I stirred together the simple ingredients (flour, salt, yeast, water, oil), mixed them a bit, let them rest a few minutes, and mixed them a bit more. The dough was very wet (again) so I added a bit more flour.

Still a little wet and sticky, but I gave it a stretch-and-fold and that helped, and then I put it in an oiled bowl.

An hour later, the dough had doubled, so I divided it in twelve and rolled each piece into a ball. Easy. Rolling them out after a short rest was easy, too. It took two tries through, but all of the pitas rolled out into pretty nice circles. I had some helpers while I was rolling out my dough (by far the highlight of the morning): 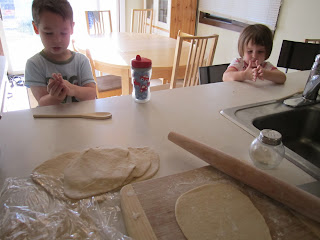 The trouble started when I went to put the pita circles into the oven. First of all, they. would. not. slide. off. It reminded me of my first try with the BBA pizza recipe; they all just folded over and crumpled onto themselves. Argh. Once I got them in the oven though, about half of them poufed up nicely. And that part was fun to watch. By the third batch, I decided to put the dough circles on a piece of parchment paper like I do with pizza, and that worked better.

When I went to do the second set, they were totally stuck together. Completely. There was absolutely NO way to separate them, even with the flour between the layers. Maybe because the kitchen had gotten too warm?

Anyway, after chasing the little ones out of the kitchen every few minutes to open the oven and fight with the dough to come off the peel, I decided I had enough pitas for lunch and would just call it quits.

It was pretty cool to make my own pitas, and I really love pita bread. But the taste on these was just so-so, and I found that several of the pitas (ones I had left in for an extra minute to achieve the golden color NM describes) were hard and cracked instead of being soft. So I think I'll try pita bread again . . . but maybe a different recipe.
Posted by Abby at 2:53 PM