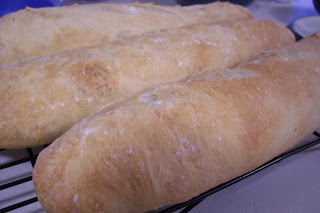 This is one of my hubby's favorite kinds of bread, so I was excited when I read Hamelman's recipe for French bread, one of the Mellow Bakers' July breads, and saw that this was a quickie: indeed, I started mixing at 12:30 this afternoon, and we were eating supper by 6:00 tonight.

This was a pretty easy recipe, although not everything went as planned.

I mixed the bread flour, water, salt, and yeast briefly, as Hamelman instructs, and then let it proof while folding the dough every 50 minutes. It is so hot here that the second and third folds happened at closer to 40 minute intervals because the dough had risen so much, it was threatening to escape its container.

I then divided the dough into three 250 g pieces (I only made half a recipe, knowing that French bread generally tastes best on the first day, and there was no way we could eat even three baguettes). Following this video that Paul posted made preshaping and shaping so much easier!! I have a really difficult time following the lengthy instructions in the book, so I liked being able to watch while I was shaping.

Then the baguettes rose for another 90 minutes while I preheated the oven. On pg. 76 when Hamelman explains how to shape a baguette, he says "Since the best volume (and arguably the best flavor) is achieved when baking is done directly on the floor of the oven...." So I put my pizza stone on the floor of the oven, and baked the baguettes right on it. This turned out to be a mistake, as the bottoms burned.

We still scraped off the burned bits and ate an entire baguette with our soup for dinner. This was the other odd thing: the bread was really salty. I even went back to check my notes and make sure that I hadn't forgotten to cut the salt when I was halving the recipe, but no, I'd measured correctly. It wasn't so salty that we couldn't eat it, but it just tasted a little odd.

So I don't think we'll be making this one again. I certainly preferred the French bread, Italian bread, or pain à l'ancienne from the BBA. But I felt like it was a great learning experience, and you can't complain about that! And anyway, have you noticed how even the worst home-baked bread (and this wasn't in that category!) generally tastes about a million times better than the best store-bought loaves? 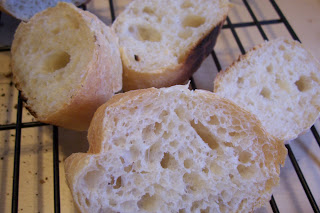 Check out the other Mellow Bakers' French breads here!
Posted by Abby at 7:45 PM