One of my favorite things about my new hobby is that there is so much to learn. Every time I feel like I've gotten a handle on this bread-baking thing, I understand what is going on with the dough, I can bake a loaf of bread while making dinner, a bread comes along to make me remember how much I still have to learn. This was one of those breads.

*****
For the rest of July, my family will be focused on spending time with my in-laws and enjoying my sister-in-law's wedding, so I had to rush to complete my three Mellow Bakers' July breads in the first twelve days of the month. (I know that doesn't sound very mellow, but I'm really not a very mellow person, so . . . .)

After reading Oggi's review of my third bread for July, 70% rye with rye soaker and whole wheat flour, I was much more excited to make it. She talks about using it to make cucumber open-faced sandwiches . . . I love those!

At night, I made the sourdough with a bit of my Austin, some rye flour, and water. I really wanted to refresh Austin a few times before I started this bread, but never got around to it, and really needed to get this bread going, so I only refreshed him once. I don't know if it was supposed to rise or move, but as with the 100% sourdough rye from the BBA, this did nothing. I don't know if getting Austin a little more active would've helped matters or not . . . it's certainly warm enough here.

I also made my soaker. Like many of my fellow Mellows, I couldn't find rye chops, so I purchased rye berries, and ground them coarsely in hubby's coffee grinder. These I mixed with water and also let them sit out overnight.

The next day, I mixed everything together: whole wheat flour, instant yeast, salt, soaker, sourdough, and water. This was not dough; it was porridge. My standmixer would do nothing with it; the dough hook just whirled on the surface. So I did a little kneading by hand, attempted a stretch-and-fold, and let it sit for 30 minutes. Sticky, globby mess.

The pan was another issue; I don't have a pullman pan. I checked the volume for the pan in the book and compared it with the volume of each of my loaf pans. Nothing came close, except for using two of my 8x4 pans, so I prepared those. When it was time to dump the dough into the pans (there was no chance of shaping these into logs!!!), the dough filled the pans less than half-way, and I remembered people talking about how these loaves didn't really rise. So I changed my mind, used my giant 10" loaf pan, filled it about two-thirds of the way, and then threw away the small bit of dough that was left.

And then I got another surprise . . . within ten minutes, the loaf had already risen to the top of the pan. Hm, what to do? Nothing to do but wait and see. In the fifty-minute rising time, the dough crested the pan, but didn't grow an insane amount, so that was a relief.

Then into the oven. I baked it for ten minutes with my aluminum roasting pan over it, then for another 35 minutes. At that point, I was supposed to take it out of the pan and finish cooking it on a sheet pan, but it was already registering 203 F in the center, so I just pulled it out of the oven. It hadn't risen at all in the oven.

****
This morning, we sliced it open. We were just short of 24 hours, but hubby and I were both feeling a bit snackish. This is a dense, chewy, nutty bread. The rye and sourdough flavors are both quite distinct, and I like the added chew from the rye berries. I'm surprised by how much hubby likes the bread, given that he's usually a French bread or ciabatta type, but he thinks it will make really good toast. And I have a cucumber on the grocery list to try that yummy cuke sandwich! 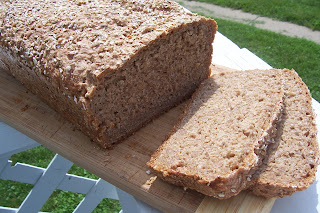 Bialys are still my favorite July bread, hands-down, but this one is pretty good, too! Check out the fellow Mellows' fabulous July breads here!
Posted by Abby at 11:01 AM