I thought my very first loaf of sourdough would be my greatest bread baking accomplishment in the BBA Challenge. I was so proud to create a loaf of bread from my very own starter and my very own yeast.

I was wrong. Nothing could beat this one, a Poilâne-style miche, despite a couple of ingredient issues:

1. I absolutely could not find medium grind whole wheat flour anywhere. I checked at every store I could think of, but no go. So rather than trying to find it and order it on-line, I decided to proceed with P.R.'s suggested substitution: half bread flour and half finely ground whole wheat flour.

2. I purchased sea salt a while ago specifically for this recipe . . . and then totally forgot about it until the dough was proofing. So this one uses table salt.

According to P.R., Lionel Poilâne is probably the most famous bread baker in the world, and his most famous bread is a "round, two-kilo, naturally fermented (wild-yeast) country bread that he calls a miche but that everyone else calls pain Poilâne" (p.242).

This was definitely my greatest bread-baking accomplishment (so far). Some highlights:

1. I fed Austin (my starter) twice before using him to make my firm starter. I set the firm starter aside, preparing myself for the double to triple rising times I've been experiencing since starting on the sourdough journey. And three hours and forty five minutes after setting it aside (it was supposed to take four hours to double), I looked on the top of the fridge to see . . . it had more than doubled already! 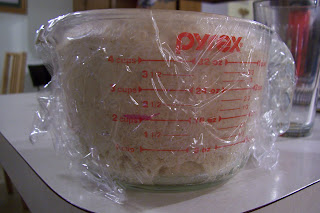 2. This morning, I mixed my firm starter, bread flour, whole wheat flour, salt, and warm water. P.R. warns that this bread dough cannot be mixed in a normal stand mixer; there is just too much. So for the first time in ages, I kneaded completely by hand. It took me twenty-five minutes to achieve a good-feeling dough. And it still wasn't quite windowpaning. (I don't know why I didn't think of this ten minutes earlier, but . . .) I finally decided to let the dough rest for five minutes. When I came back, the gluten had developed and the dough was smooth and ready to be proofed after only another minute of kneading. 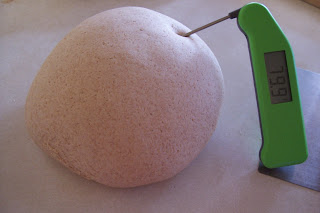 3. Again I put it in the proofing bowl, preparing myself for the dough to take longer than suggested (another four hours). When we got home from the zoo after three and a half hours, again it had more than doubled! Wahoo! 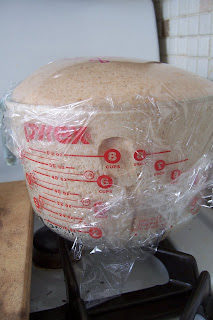 4. I formed it into a boule, put it in an improvised proofing bowl (a glass bowl with kitchen towel) and let it rise for another two hours. This was an enormous beautiful loaf!

5. Slashing has been going terribly for me. I've tried razor blades, knives, and scissors, all to no avail. Yesterday morning, I was having breakfast with a friend at a restaurant across from my favorite kitchen store. On the way out, I stopped in the store to browse the bread section and saw a lame, which I've been contemplating buying for quite some time. I went for it. Oh my goodness, I cannot believe the difference that having the right tool makes! A simple flick of the wrist and my loaf had the best slashes I've ever done. 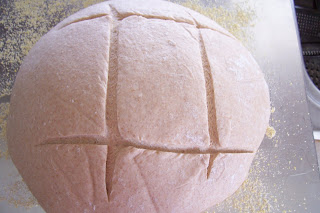 6. Into a 500 df oven, two cups of boiling water into the steam pan, and a couple of spritzes on the sides to help create a little more steam . . . I can't believe this loaf! The picture on the cover of the book shows a really wide loaf; mine rose up more than out. Still, a four-pound (and three-quarters of an ounce) glorious loaf of bread. 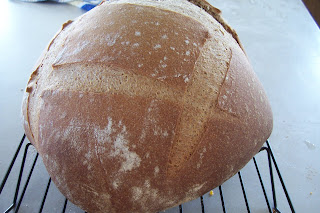 The crumb was dense and chewy. The taste was nutty, with a slight hint of sourdough. It was not what I was expecting at all, but we enjoyed it buttered with our soup for dinner. 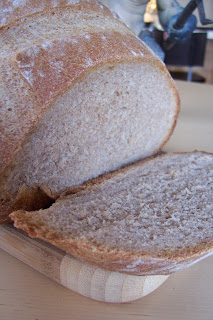 Hubby insisted I share this picture of one of his trolls (don't ask) next to the loaf so you'd get an idea of its size: 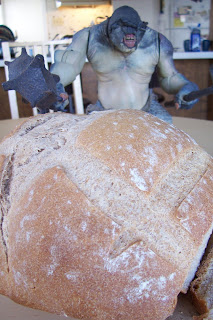 My spring break begins on Friday, so I will not be baking any BBA Challenge breads for a couple of weeks. I am still hoping to get my Mellow Bakers bread (hot cross buns) baked before break starts, though!
Posted by Abby at 5:53 PM