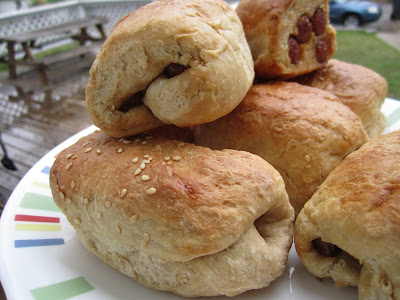 According to my newest issue of Cook's Country, many groups created easy-to-make portable meals to take down to the mines in their lunch buckets in the late 19th century; for Italians in West Virginia, it was a pepperoni roll. The recipe for this on-the-go lunch clearly became a must-make in our house. When I mentioned these to Kayte, she decided to join in, and then Margaret did, too. Due to my hubby's desire to have these immediately if not sooner, we ended up baking these on different days, but they were a big hit with all three of our families.

According to Cook's Country, this recipe makes 16 rolls. Initially I intended to cut the recipe in half, but then I read the note about how easy these were to freeze. So I made and baked 16, which fed us for a dinner and a picnic lunch at the zoo, and then froze the rest. When we needed a quick, no hassle dinner, I stuck the rolls into the oven, made a batch of Donna Hay's mozzarella and tomato dip, and we had another dinner, just as good as the first!

(These freeze really well: wrap each roll tightly in plastic wrap and freeze. To reheat, wrap each roll in foil. Bake directly on the rack at 350º for 35 - 45 min or until heated through.) 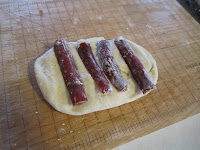 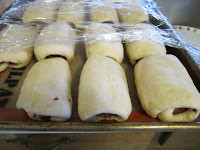 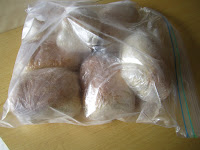 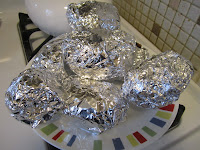