I first made my sourdough starter in the midst of the Bread Baker's Apprentice Challenge, in February of 2010. It was slow-going, which I took personally, but as the warmer weather hit in June, I realized that my starter's slow nature was likely due to our cool house and frigid winter. Austin the Starter has served me well over the past two years.

Since I've been finished with my bread challenges, Austin spends most of his time in the back of my fridge. He's endured many long periods of neglect, but always does fine when I pull him out and give him a few feedings. So imagine my surprise when I pulled him from the fridge a few days ago, and, whether it was because he'd finally been ignored for too long or because the new lid I put on top was too tight, this is what I found: 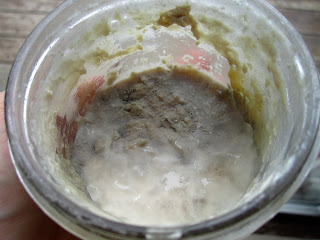 Mold!!! I'm not going to lie; I almost cried. Austin has been a reliable member of my kitchen staff for so long, and it's such a process to create a sourdough starter...and the longer they're around, the better their flavor, so I really didn't want to start over. :(

And then I remembered that two summers ago, when we were heading West for our summer trip, I followed Paul's advice and dried some of my starter. I frantically started digging through my freezer. No starter. :( (I did get my freezer reorganized in the process of my search, so that was good.) I dug through the deep freeze; no starter. I came back upstairs, again on the verge of tears. And there, in the bottom of the ice bucket, I found this: 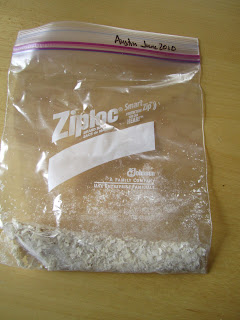 Yay! So I pulled up Paul's tutorial on how to revive a dried starter and got to work. I took a teaspoon of starter (saving the rest, just in case it didn't work or this happens again!) and mixed it with a couple of teaspoons of water. I let them sit for a few hours until the starter softened and I could stir it all together. Then I fed it some flour and water and crossed my fingers. 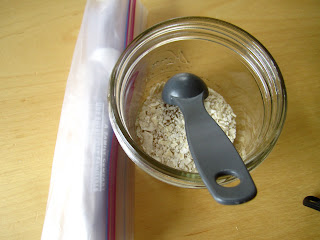 After a day, I detected a few bubbles. I think at that point, I should have just fed it again and waited a bit, but I was too excited, so I called it good and did an official feeding: 20 g of the starter with 40 g each of flour and water. And then I waited and waited and waited. I'd been thinking that I might need to start over and try again, when I came downstairs to this: 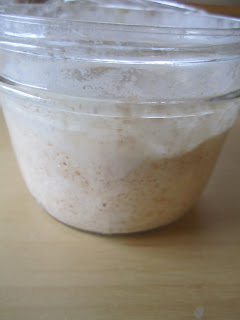 I'm not sure if I got ahead of myself and tried to move it along too fast, or if it was just that our house has been a little cool, but it took a good day for it to double. But double it clearly did! I've been feeding it regularly for two days now, and after each feeding, it takes less time to double again. And it already smells deliciously like sourdough.

My plan is to keep it on the counter and to keep feeding it regularly for another few days to make sure it's really awake, alive, and healthy. And then I'll try baking with it to make sure. But thankfully, we seem to be back in business! Austin lives!