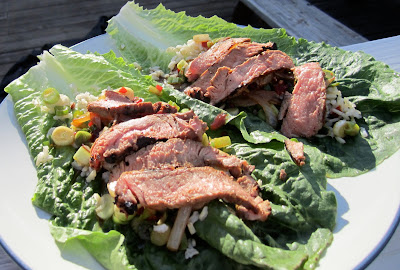 The May chef for our Twitter avatar fun (a group of us are baking/cooking from a new chef each month and using that recipe as our Twitter avatar) is David Chang, chosen by Tracey. I'd never heard of David Chang or his restaurant Momofuku before this month's challenge, and I've had fun reading up on him and his restaurants. I did have a tough time finding many online recipes, but when I stumbled on this recipe for steak in lettuce rolls, I knew my search was over.

The recipe was pretty easy, although several of the steps do require you to start a little early. An hour or so before dinner, I started a saucepan of brown rice, marinated the steak, and mixed up the scallion salad. The steak is marinated in an interesting mixture of apple juice, low sodium soy sauce, garlic, ginger, sliced onion, lemon juice, dark sesame oil, and sugar. The scallion salad is sliced green onions, red chiles, rice vinegar, low sodium soy sauce, and dark sesame oil. Knowing that the kids and I have a much lower tolerance for spicy foods than my hubby, I only used one of the chiles in the scallion salad; the other, I sliced and put in a bowl for hubby (who used them all in his lettuce wraps).

Once it's dinner time, the steak is quickly grilled over high heat, then set aside for a rest, while the onions from the marinade are sauteed. And then it's assembly time!

I did have a challenge finding the soybean paste David Chang calls for, so I did a little research on substitutions. I'm glad I did because apparently the brand Chang recommends (Ssamjang) is a Korean soybean paste, which is different from other soybean pastes, and is actually mixed with red chili pepper paste. While the steak was marinating and the rice was cooking, I ran out to the store to check one more time; I didn't find the right brand, but I did find a Korean "everyday sauce," which said on the back that it was "soybean paste mixed with red chili"...perfect!

The wraps are assembled by piling rice, scallion salad, soybean paste, steak, and onions on a lettuce leaf. It was no surprise that the kids both ate the steak out of their wraps and then asked for cereal. I thought the wraps were okay; they were pretty spicy for me (even with only one chili pepper and just a tiny bit of the spicy soybean paste). But that wasn't a surprise either...these aren't really my thing. I really made them for my hubby, who absolutely loved them. Therefore, I consider this challenge a success!
Posted by Abby at 7:54 PM