The next tart I made for the Modern Baker Challenge was the lemony cheese tart with sour cream glaze. 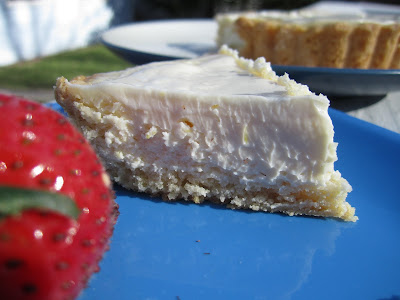 The filling is made by mixing softened cream cheese, sugar, vanilla extract, lemon zest, eggs, and sour cream. These are placed into a sweet tart crust (actually two mini crusts). Even though they were mini, they baked for the full thirty minutes. While they were baking, I mixed up the sour cream glaze: sour cream, sugar, and vanilla extract. When I pulled the tarts out of the oven, I poured the glaze over the top. Unfortunately, I had filled the tarts so full (I'd used most of a third of the recipe in the two mini tarts) that the glaze ran off the edges and made a bit of a mess. But I got it cleaned up, put the tarts back into the oven for ten more minutes, and then took them out to cool.

Hubby and I enjoyed one of the mini tarts that night, warm from the oven. It was really yummy. It was even better the next night, cold from the fridge; it tasted like a lemony cheese cake.
Posted by Abby at 11:22 AM