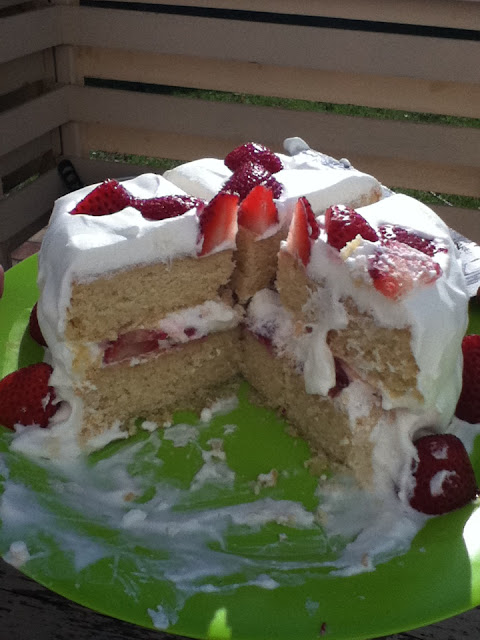 Our next recipe from Bake! was chosen by Kayte: strawberry chantilly cake, in honor of her birthday.

NM says to wait until you can find perfectly ripe, local strawberries. I knew I'd have a loooooong wait (we had snow flurries yesterday at our May Day parade, after all). I could've made the Victoria sandwich variation, like Andrea did; it also looks wonderful.

But my baby sister just got accepted into nursing school (yay!!!), and she had a barbecue this weekend. I really wanted a fancy cake to celebrate, so I decided to just use our grocery store strawberries and cross my fingers that they were sweet and flavorful enough.

I copied Kayte, who's been raving about her little 6" pans, and picked up a couple of 6" cake pans. They were so fun! I used a half batch of the yellow cake recipe; I was initially worried because it seemed like so little batter in each of the pans, but I think the pans are just overly deep because the layers ended up being perfect (I actually weighed them to be sure I had the same amount of batter in each pan; I've never done that before, but I will do it from now on...so much easier than eye-balling it!). 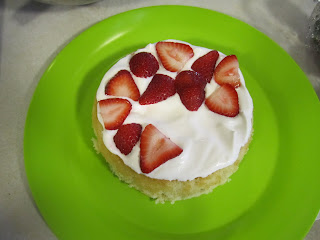 The morning of the party, I made the whipped cream. I made 2/3 of the whipped cream recipe, but I had a lot left over. Next time, I'll just make 1/2 batch. Then I layered: one layer of the cake, a coating of whipped cream, slices of strawberries, more whipped cream, the other cake layer. And then whipped cream around the outside. To celebrate my sister's new career, I used the strawberries in an attempt to create the red nursing cross symbol on top...it's the thought that counts, I guess! ;)

The cake was a big hit. We ended up with a bigger crowd than expected, so I had to serve skinny slices...I was able to get 12 slices from the 6" cake. The cake itself was a yummy recipe, and you can't go wrong with strawberries, whipped cream, and cake! 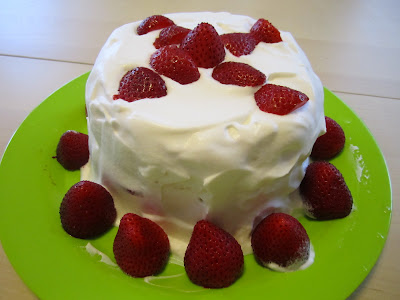