I never, never would've expected I'd be willing to make a recipe that started with this: 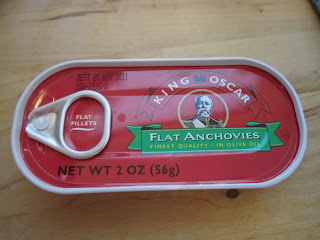 so you can imagine my emotions when I saw pissaladière on the May list of breads for Mellow Bakers. JH describes pissaladière as: "the pizza of Provence, replete with onions cooked long and slow, fresh herbs, anchovies, and pungent black niçoise olives." 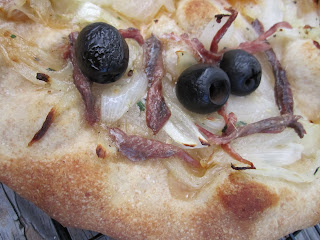 On the one hand, we are not fish people; on the other hand, we love pizza more than just about any other meal.

Due to scheduling and life and whatever, I actually made this bread over three days. I made the pâte fermentée (bread flour, water, salt, and yeast) on Saturday evening and let it ripen until Sunday afternoon. At that point, I added more bread flour, some whole wheat flour, water, salt, yeast, the pâte fermentée, and finally, some olive oil. The dough was kneaded briefly and then allowed to proof for two hours, with a strech-and-fold halfway through.

But then I realized we didn't have any onions, and we needed to feed the kids dinner, so I threw one pound of dough into the freezer and one into the fridge.

Tonight (after buying some onions), I made the topping: onions and garlic sautéed in olive oil and mixed with fresh thyme and salt and pepper. I dumped them on the crust, along with black olives, thinly sliced anchovies, (and pepperoni). We baked it for about 10 minutes at 515º.

I kind of wish this had been described as an appetizer, a flatbread with unusual toppings, instead of as a pizza. We are red sauce and mozzarella pizza people (especially my hubby), and this was nothing like our usual pizza. However, the crust was tasty; I liked the addition of the whole wheat flour. And the onions were pretty good (I wish I'd cooked them a little longer to caramelize them). I was going to try the little anchovy corner, but the smell just did me in, so hubby was the designated taste tester. His comment: "salty."

Not one we'll make again, but I'm glad we tried it. I'm sure we'll make our traditional pizza with the remaining pound of dough. 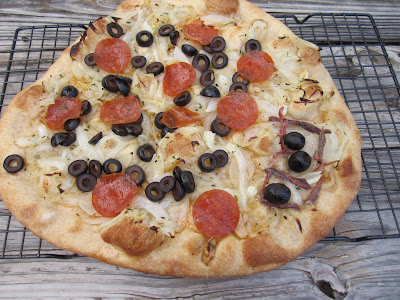