I didn't bake any challenge breads this weekend, but I did make a few fun things . . . I'm not sure any of them deserves its own post, so here is a collection of weekend tidbits!

* Butternut squash puree
The little guy started preschool this fall. We found a fabulous preschool at a local nature center, and it is just perfect for my nature-loving guy. They have a working farm, an apiary, ponds, prairie, trails to hike. He loves it. The last few times I've gone to pick him up, they've had a selection of foods from the farm; on Thursday, we picked up a butternut squash. I followed this recipe from Pioneer Woman for butternut squash puree. After the 30 minutes called for, the squash wasn't tender enough, but the rest of dinner was ready so I pulled it out of the oven and proceeded with the recipe. As a result, it was chunkier than I would've liked, but it still tasted wonderful! 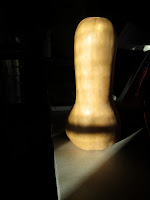 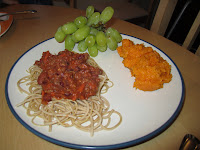 * Whole wheat apple muffins & Homemade tasty toaster tarts
We still had some apples left over from our trip to the orchard last weekend. The little guy requested apple muffins, so I found this King Arthur recipe via Smitten Kitchen (I subbed in my yogurt for the buttermilk). The kiddos helped me measure and mix. We all really loved these muffins. I ate two, and I'm not even a muffin person!

And I've had this recipe for homemade pop tarts flagged (again from King Arthur via Smitten Kitchen) for months. I was really intrigued.

The dough and I did not get along. The first time I made it, I could not get it to come together, no matter how much liquid I used. On re-reading the recipe, I realized that I had only used one stick of butter instead of two . . . . grrrrrrr. So I had to dump the first batch in the trash and start again. The second batch came together, although it was still much more crumbly than it was supposed to be. I had to roll it out between two sheets of parchment paper, and then it stuck to the paper. Gr. But I was able to get about a dozen mini tarts.

I made three fillings: melted chocolate, homemade strawberry jam, and apple. For the apple, I used my favorite apple crisp filling recipe: 1 apple, 1 tbsp of sugar, a pinch of cinnamon, 1 tsp flour, and 1 tsp butter, cooked down over medium heat for five minutes.

The chocolate and apple were both great warm. All three were tasty the next day. While I didn't think they tasted (or looked) like store-bought pop tarts at all, hubby declared that the apple version tasted like "a baby apple pie in my mouth!" 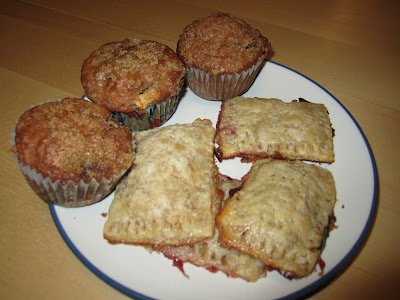 * ABED bagels
I needed something yummy for bookclub on Sunday. Hubby requested bagels, and I decided to try the bagel recipe from Peter Reinhart's Artisan Breads Every Day. This recipe was incredibly easy, even easier than the BBA version which I've made a bunch of times. A quick mix of malt syrup, yeast, salt, and water, then all of that mixed with flour. Mix, rest, knead, and rise: all of this took just slightly over an hour. Then I cut the dough into a dozen pieces of two ounces each, shaped them into bagels, and stuck them in the fridge. The next morning, I let them rise on the counter for an hour before dipping them in the poaching liquid and then baking them for about sixteen minutes. The texture and crust were just as good as BBA or Hamelman; the flavor wasn't quite as distinctively bagely. But for a quick Sunday breakfast, these were perfect! 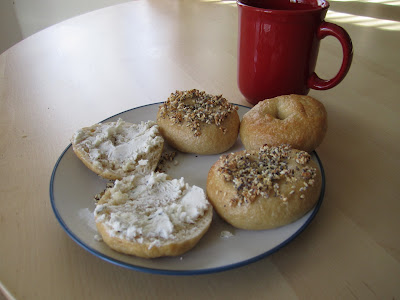