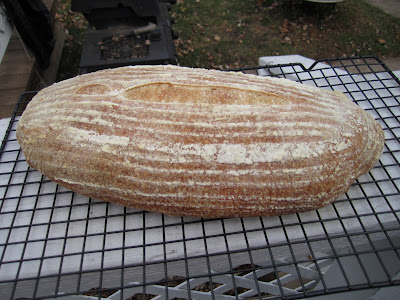 I am still feeling guilty for skipping my first ever Mellow Bakers bread (pretzels) last month. I just couldn't figure out what to do about the lye. I was curious to try the process, but nervous about using such harsh chemicals in a house with two little ones running around. I was going to just go the baking soda route, but then I didn't have any diastatic malt barley powder......

So I just went ahead to November (where we have another bread that I'm contemplating skipping).

My first bread was country bread. This one was pretty basic: bread flour, salt, instant yeast, and water. I made the preferment two nights ago. By yesterday afternoon, it had risen quite well. I proceeded with the recipe through the shaping stage, and then stuck the bread into the fridge overnight.

This afternoon, our schedule was pretty tight, so I had hubby pull the bread out of the fridge and preheat the oven while I picked up the little guy from preschool. Unfortunately, by the time I got home, the bread had already overproofed. I decided to try slashing anyway......whoooooooosh (the sound of all of the air leaving my bread). It rallied a little in the oven, but it was still a pretty flat loaf.

As for the taste? I don't think we'll make this one again, as we have so many other recipes we prefer (generally recipes with whole grains ~ like rustic bread). But it was very yummy with our soup, and the four of us managed to demolish more than half the loaf at dinner. 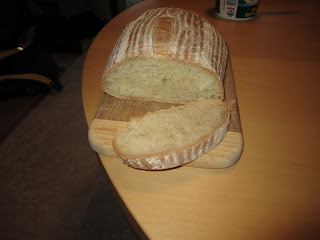