Does anyone else have this problem? We needed a sandwich bread for the week. We have a few recipes that we love. And yet, with all of the breads yet to bake in the world, I just have to try out a new one.........

Last night, I made the liquid levain and a soaker. The soaker was flax seeds, oatmeal, cracked rye (rye berries coarsely ground with hubby's coffee grinder). It was supposed to include sunflower seeds, too, but I didn't have any, so I just used some extra flax and oatmeal.

Today, I mixed everything together. It was a lot of dough (over four pounds), and I actually got a bit worried about my stand mixer. So I cut the mixing time short and gave it an extra fold; seemed to do the trick. I made two almost-two-pound loaves in my bannetons and two giant rolls.

We had the rolls for dinner tonight with beef stew. (If it seems like an odd combination, it kind of was, but we were at my niece's birthday party this afternoon, so got home to stew in the crock pot and fresh bread and it was dinner time, so.....) Hamelman describes this bread as one of the most delectably flavored breads ever. We definitely enjoyed it; hubby was surprised by how soft the texture was, given how dark it looked. As usual, the kids didn't like the seeds. This bread is quite yummy, but I would place it second to the whole wheat multigrain. 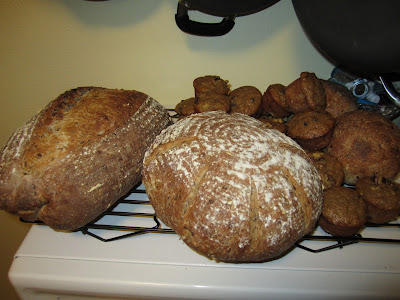 (Sorry for the poor-quality photo...With the sun going down at 4ish these days, it's going to be challenging to get a photo with natural light for the next few months!)
Posted by Abby at 7:19 PM