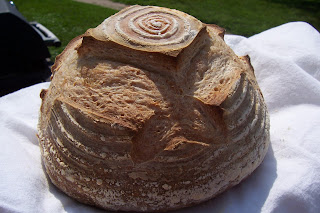 Phew, just under the wire. I baked my final June bread for the Mellow Bakers earlier this week: Vermont Sourdough. I have been curious about this bread ever since I first started researching sourdough when I was approaching that section in the BBA Challenge. Many of the BBA Challenge bakers who were ahead of me called P. R.'s basic sourdough pretty bland, and everywhere I read about sourdough talked about Hamelman's Vermont Sourdough as the absolute best.

We have three variations to choose from: Vermont Sourdough, Vermont Sourdough with Whole Wheat, and Vermont Sourdough with Increased Whole Grain. Most of the Mellow Bakers seem to be baking all three to compare them; I would've loved to, but hubby (my main bread eater) is not a huge sourdough fan, and I've kind of run out of time this month. Hopefully I'll get to the other two variations at some point . . . if I ever have a bread to-do list that isn't a mile long!

So I made the plain ol' basic Vermont Sourdough, and just a half recipe.

I refreshed Austin two days before I made the bread, and then turned him into a liquid levain by adding a bit of bread flour and a lot of water. The next day, I added the rest of the ingredients, let them autolyse, added the salt, and finished mixing. I folded it twice and then shaped it into a round.

Hamelman states that, although the bread can be baked after its final on-the-counter fermentation, it is generally retarded in the fridge overnight: "The result is a loaf with moderate tanginess and a sturdy crust" (p. 154). So I heavily floured my round banneton and threw it into the fridge overnight.

It didn't rise much overnight, but Hamelman also states that the loaf can be put right into the oven, so once the oven and my baking stone were preheated, I slashed the loaf and slid it in. On the recommendation of other Mellows, I finally purchased some straight razors; I don't know if it was the new tool or slashing a cool bread, but slashing has never gone more easily for me. It was wonderful! I used my fake-out aluminum pan steaming technique and I couldn't believe the oven spring. My loaf actually grew so tall that it pushed the pan off of itself. I checked the bread after about 30 minutes and it was over 200F, so I pulled it out.

This bread is definitely the best sourdough I've made yet, although since I'd also made two loaves of the potato, cheddar, chive torpedoes (from the BBA) on the same day, I have to admit that most of the sourdough loaf is still sitting on my counter. 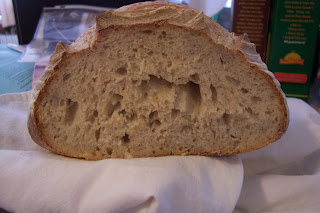