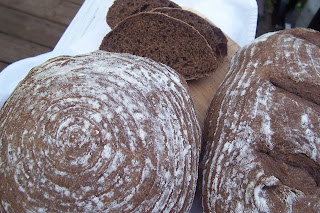 Here we are, almost half-way through June, and I am finally getting around to baking the first Mellow Baker bread for the month: beer bread with roasted barley. (Because, as mellow has never been a word used to describe me, I of course must bake all three breads each month.)

Hubby saw this one while I was browsing through my Hamelman book one day and was beside himself; two of his very favorite things -- beer and fresh-baked bread -- combined into one! Imagine his excitement when it popped into our schedule only a few months into our baking!

Hubby was, of course, put in charge of picking both barley and beer, as I am not a beer drinker and know nothing of such things. This bread required a trip to our local home brew store, where they were helpful enough to point us to four varieties of dehusked malted barley. We chose one with "debittered" in its title and "coffee," "cocoa," and "Belgian" in its description. It was a beautiful dark color, which I'm guessing is why my final product ended up a lot darker than other bakers'. Drinking a beer last night, hubby noticed that it was also a Belgian beer with hints of coffee and cocoa, so he decided it would be a nice one to pair with the barley for the bread recipe.

I made a poolish last night: equal parts bread flour and water and the tiniest bit of instant yeast. It was supposed to sit out for 12 - 16 hours. After 12, it was clearly bubbly and ready to go, but we were on our way out the door for our Sunday trip to the zoo, so it had to wait for an additional five hours. Luckily, it didn't look like it minded the extra wait.

This afternoon I mixed the poolish with more bread flour, some whole wheat flour, salt, yeast, and cold beer mixed with a little warm water. Oh, and the barley, finely ground. The smell of the dough had hints of beer, chocolate, yeast.....with a very rich, dark color...fascinating!

Proofed for two hours with a fold midway through. Then preshaped and shaped: one oval and one round, only because the bannetons I have are those shapes. When I dumped them out onto a sheet pan, the pattern on the round loaf of the flour against the dark bread was so pretty, I couldn't bring myself to slash it. I did try to slash the oval loaf, although as usual, it didn't go that well. Onto my preheated baking stone, added steam, checked after 33 minutes (was supposed to bake for 40) and the loaves were already at 203 F, so I pulled them out.

We let them cool(ish), and then sliced into the oval loaf. The beer flavor was pretty strong to me, not at all to hubby (not surprising, given his love of and my dislike of beer). The crust was perfect and the flavor was very complex, the texture almost creamy. I didn't love it plain, but found it delicious smeared with a little butter. Hubby even said it was the best bread-and-butter bread I've made. Surprisingly, however, he put it under the "may make again" category. We'll have to see what others think of the bread!

Check out other Mellow Bakers' beer breads! (as well as Vermont sourdough and pizza, our other two June breads)
Posted by Abby at 8:06 PM