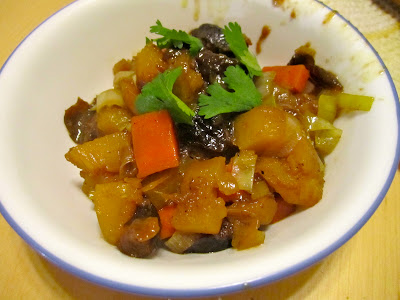 Our November chef for our Twitter avatar fun was Ghillie Başan, chosen by Andrea. She is new to me; according to her website, "Ghillie Başan is known for her informative and evocative books on the culinary cultures of Turkey, the Middle East, North Africa and Southeast Asia." Sounded good to me!

There aren't many of her recipes on the web, but I did find several that sounded intriguing on her site, including the recipe for tagine of yams, carrots, prunes, and honey, a recipe from her book Modern Moroccan.

The recipe calls for yams, but with how many squash we still have in our basement, I did a little checking to see if there were any squash that could be substituted for yams or sweet potatoes. And I found one: delicata, which is even called "sweet potato squash." The recipe called for pearl onions, but I had a leek and some yellow onions in the veggie drawer, so I used them. The final substitution that I made was the stock; this is vegetarian dish which calls for vegetable stock, but I was all out, so I just used low-sodium chicken stock.

And the result? We really enjoyed this side-dish! The veggies are slightly caramelized and quite sweet. It was delicious with a roasted chicken, my most recent Mellow Bakers bread, and fruit. 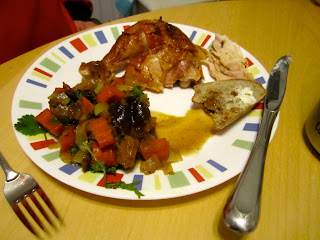 1. Preheat the oven to 400º.
2. In a large dutch oven, heat the olive oil and butter. Add the onions and cook over medium heat until tender, about 3 - 4 minutes. Remove half of the onions and set aside.
3. Add the delicata and carrots to the pan, increase the heat to medium-high and cook until lightly browned, about 6 - 8 minutes.
4. Add the prunes, spices, and honey. Stir. Then pour in the stock, salt, and pepper. Stir and cover.
5. Put into the oven and cook for 45 minutes. Add the rest of the onions and cook an additional 10 minutes.
6. Sprinkle with cilantro and serve.
Posted by Abby at 7:25 PM