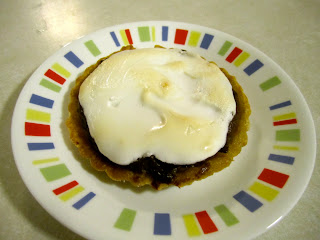 Gr. I purposefully left a mini tart so I could take a photo this afternoon.
And then forgot about it until it was dark again.
This only being home for one hour of daylight is killer on the food photography.

This weekend's Bake! pick was Margaret's; she picked chocolate meringue tart (or chocolate marshmellow pie, as my kids called it).

This one should've been easy, except that my little guy who is usually asleep by 7:00 was up until 9:30 last night, which meant this was definitely a case of distracted baking.

For the tart crust, NM calls for flaky pastry crust. I had a tart crust in the freezer, just labeled "tart crust," so I'm not sure which recipe it was (or even from which book, Modern Baker or Bake!). Either way, I divided it in half, used half to make three 4" crusts, rolled them out (easily!), and put them in the fridge to chill. (I used the other half to make this apple tart that Nancy posted earlier today; perfect for a bit of left-over tart crust and a few leftover apples.)

Meanwhile, I made the chocolate cream (a half-batch, which filled the three mini tart crusts and a large-ish ramekin): whole milk, sugar, half-and-half, corn starch, eggs, and bittersweet chocolate. Margaret had a problem with her cream not setting up...mine went the other way. It was really close for a long time...and then something happened with the little guy and when I looked back, it was so thick I could barely stir it. I was worried that it would taste curdled or lumpy, but the texture was actually perfect.

I baked the mini tart crusts until they were golden. Unfortunately, I forgot to weigh them down with beans, so they shrunk up quite a bit in the oven. While the crusts and chocolate cream were cooling, I made the meringue.

This part did not go so well. I'm not sure what happened, as I've used NM's method of heating the egg whites, sugar, and salt, and then whipping them before with great success. But mine never thickened up (check out Margaret's for a look at how beautiful and full-bodied it should've been), and again I was dealing with the little-guy-who-wouldn't-sleep, so I just gave up and dumped it on top of the chocolate. I think because of the lack of fluffiness, my meringue took a lot longer to turn golden in the oven.

It didn't matter. Hubby gobbled his mini tart right up. He said that he's normally not crazy about meringue, but he loved the crust and the chocolate, and the meringue had a more marshmellowy texture that was actually quite yummy. So despite everything, a success!
Posted by Abby at 11:55 AM