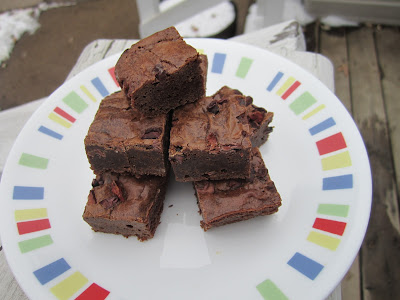 When I gave my copy of The Modern Baker to my hubby so he could choose my "official" blogging cookie for the cookie section of the Challenge, he immediately picked cocoa nib brownies. I didn't commit, though, because I had no idea where to get cocoa nibs.

One of the best parts of being a part of this blogging community, besides having other people who love to talk about food as much as me, is getting advice and ideas. Melanie mentioned that she saw cocoa nibs at Whole Foods, and even though we live in different parts of the country, I checked and sure enough, they had them! Lucky hubby. :)

The brownies are made with a similar method to the truffle brownies and Florida brownies from Bake!, both of which are now family favorites. The butter is melted until it sizzles, and then the chocolate is added and allowed to melt. Meanwhile, the brown sugar is mixed with the eggs, and then salt, sugar, and vanilla are added. The chocolate-butter mixture is stirred in with a spatula, and then the flour is folded in. Finally half of the cocoa nibs are added to the batter and the rest of them are sprinkled over the top.

As with the other brownie recipes, NM says to refrigerate them overnight before cutting them. He also warns that it may be hard to pull the foil off the brownies because they're so moist; he's not wrong about that! Of course, when little pieces broke off, we just had to sample them, even though they hadn't been cooled overnight. These are so good! NM says, "Nibs are unsweetened, so they have to be used somewhat sparingly to avoid imparting a bitter...flavor. They're the perfect counterpoint to this fudgy brownie recipe, adding a little texture and a bit of balance to the batter's natural sweetness." I couldn't agree more!

Because they're so rich, I cut them into little 1" squares. I brought some to school to share with some of my debaters who helped to give a grant presentation the other day. Hubby brought some in to share with his coworkers; when he turned around, the container was empty. I had a little container leftover, saved for my photos, and asked hubby for permission to bring them to share with my coworkers....you should've seen the look I got! He was not going to give any more away! :) By the way, these are great alone, but even more excellent with a little scoop of vanilla bean ice cream.
Posted by Abby at 12:43 PM