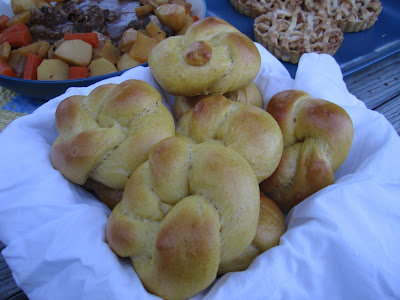 Happy October! I'm so happy that it's October and my kitchen finally looks like my kitchen again: dishes in the dish drain piled to the ceiling, all attachments for my stand mixer hanging out, multiple baking sheets and cooling racks perched on corners of the counter.

I gave up baking for the month of September. This summer was good for our tummies, but not so much for our waistlines. Having kids old enough to play more independently combined with being two teachers on summer vacation meant that I had a lot of time to play in the kitchen and, with no one going to work, daycare, or preschool, all of the treats just sat on our counter and we ate them all. Tasty, but not good for us.

So, since September is a busy month anyway with the start of school, debate, and preschool, I vowed to clean it up: no baking (with the exception of two tiny loaves that I made for Mellow Bakers and made hubby eat), no pasta, no bread, no desserts, no ice cream. It was a long month. :) Just kidding. Actually it felt pretty good, and it wasn't until last week that hubby started asking plaintively, "How long until October?!?"

I think I actually missed the process of baking more than I missed the foods themselves. Yesterday (October 1st), I was at a debate tournament from 6:30 in the morning until 5:00 at night, and I came home exhausted. Nothing happened in the kitchen. But today.......we spent the morning at the apple orchard and I spent the rest of the day in the kitchen. *happy sigh* 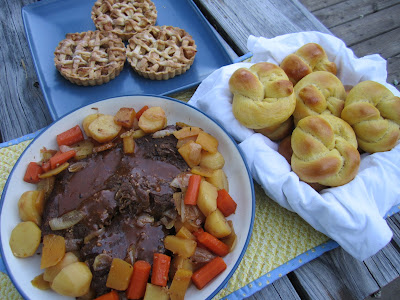 For the Artisan Bread Bakers' Bread of the Month for October, my friend Phyl chose pumpkin knotted dinner rolls. Kayte made them first, and since she hates pumpkins and absolutely raved about them, you know I had to try them.

This was an easy recipe, made by combining yeast (I used instant), warm milk, melted unsalted butter, eggs, sugar, salt, and flour (I used a combination of all-purpose, bread, and white whole wheat)...and the secret ingredient: pumpkin! I had an extra cup of pumpkin puree in the freezer, leftover from the pumpkin muffins that I made for next weekend's pumpkin roundup (stay tuned!).

After kneading, I let the dough rise for about an hour and a half, with a stretch-and-fold in the middle. Then I divided the dough in two, put half in the fridge for later in the week, and split the remaining half into 60g sections. These I rolled and knotted. They rose for another hour or so and then baked for 15 minutes.

These rolls are light and fluffy, with no hint of pumpkin flavor, but a beautiful orange color. Try 'em!
Posted by Abby at 7:39 PM