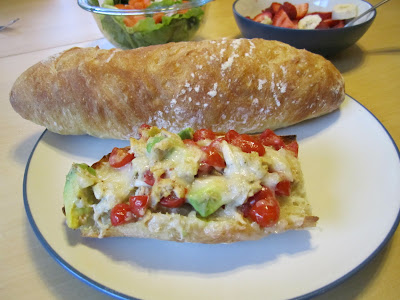 Browsing through my newest issue of Cooking Light the other day, I spotted a recipe for tuna melts with avocado. I almost always order a tuna sandwich when we eat out at a diner or sandwich shop, but I wasn't sure how my family would feel about it. I read the recipe to hubby and asked if it was something I should just make for myself or if it was something he would be willing to try; he said to go ahead and put it on the family dinner list.

The recipe calls for French bread, so I immediately turned to my bread books to see which recipe I should make. I happened to find one French bread from Hamelman's Bread that the Mellow Bakers haven't made yet, and loving to find one recipe that meets two goals, I jumped on it: unkneaded, six-folded French bread.

This bread is perfect for anyone who is scared of the kneading process and/or doesn't have a stand-mixer. It's a fairly quick recipe: I started gathering ingredients at 11:40 this morning, and we were sitting down to eat our sandwiches at 5:40. But while it's not difficult, it is fairly limiting: once you start, you pretty much can't leave the house.

Check out the process; it's fascinating: first, you place your ingredients into a mixing bowl (bread flour, water, instant yeast, and salt). You don't mix with a dough hook or knead with your hand; you simply take your bench scraper and, turning the bowl as you go, fold the ingredients over on themselves 20 times. Then you let it rest for 30 minutes. Then you do the same thing six more times: fold the ingredients (which rapidly become a normal-looking dough) 20 times and rest for 30 minutes. That's it.

At the end of this bulk fermentation, you shape the baguettes. I followed this video again. (I'd scaled the recipe down and made three baguettes of about 300 g each.) They rest for an hour (conveniently just enough time for the oven to preheat) and then bake; mine were done in 20 minutes.

The loaves were perfect with the tuna sandwich, and the family easily polished off the rest of the loaf that was sitting on the counter. The texture was pleasantly chewy with a crackly crust. It wasn't the best baguette we've ever had in this house, but it was really, really good bread, and definitely the best one-day baguette recipe I've ever made.

1. Preheat the broiler to high.
2. Combine olive oil, shallots, mustard, pepper, salt, and tuna in a bowl, stirring well.
3. Juice the lemon into a bowl. Add the avocado pieces and toss.
4. Add avocado, juice, and tomato to the tuna mixture.
5. Place baguettes pieces on a baking pan. Distribute the tuna mixture evenly. Sprinkle with 1 - 2 tbsp of shredded cheese.
6. Broil three minutes, or until cheese is bubbly. (Mine were perfectly done in three minutes.)
Posted by Abby at 7:49 PM