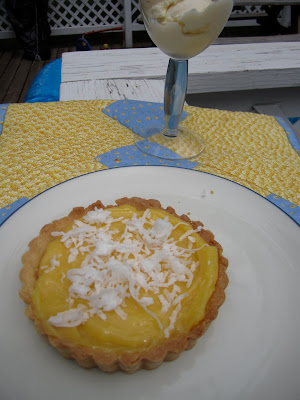 We've just returned to my kitchen home after nearly three weeks away, and my to-bake and to-cook lists have gotten insanely long while I've been away. We always spend two or three weeks with my in-laws in the summer. It is incredibly relaxing: my mother-in-law cooks amazing down-home meals (chicken and noodles with mashed potatoes, anyone?) and generally takes care of us, the kiddos play with their cousins for hours on end. It's such a great start to the summer.

But after about a week or ten days, I really start to miss my kitchen. This is when I start bookmarking recipes like crazy and spend hours making a to-do list and a grocery list for my return.

While we were in the car on our 17-hour drive home, some of my baking buddies decided to make lemon curd ice cream, spearheaded by Phyl. Tracey had posted a recipe on her blog, and she claimed to love it as much as her favorite ice cream, mint chocolate chip (also my favorite). As soon as we returned, it was the first thing I set about making. Happily, one of the few sweet tarts I have left from the Modern Baker Challenge was the lemon-lime tartlets, so I was able to make the lemon curd for those and use it in both.

I made 2/3 of the recipe for the lemon curd, which was enough for one 4" mini-tart, 50 g for the ice cream, and a little bit left over. The curd requires lemons, limes, sugar, unsalted butter, and egg yolks. I couldn't find organic limes; I picked up one regular lime, but had an impossible time zesting it, so my curd was almost all lemon, with about 1-2 tablespoons of lime juice thrown in. The curd was a little time-consuming, but not difficult: put the lemon zests in lemon juice and sugar, simmer, and then allow to rest. After discarding the zest, add the butter to the pan and simmer again. Temper the egg yolks and then stir the whole mixture until thickened. I refrigerated the curd overnight.

Today, I pulled cookie dough crust dough from the freezer and made two mini-tart crusts. NM says to use sweet tart dough, but Andrea thought the cookie dough would be a better pairing and it's what I had in the freezer. On my last post where I talked about my struggles with NM's cookie dough tart crusts, Heather commented that I might need to knead the dough a little longer before rolling. I tried it this time (also using more flour than usual), and I actually had way more success than I've ever had. (Thanks, Heather!) The crusts baked for about 15 minutes, cooled for about 30 minutes, and then I dumped in the lemon curd. The tarts were pretty good.........however:

Last night, I also started making the lemon curd ice cream.  I tempered the egg yolks with heated milk, and then thickened the custard...and then suddenly smelled scrambled eggs and realized that the temperature of the custard had shot from 150 F to 210 F in just a few seconds. I dumped the whole batch into the trash, grumbled a bunch, washed all of my dishes, and started over, this time being very careful to keep the custard at low heat and my eyes on the pan. It worked! I whisked in lemon zest and lemon curd and then refrigerated the whole thing over night.

This morning, I whipped up some whipping cream and folded it into the lemon custard, along with some fresh lemon juice. This step seemed really fussy and I'd debated skipping it, but I'm so glad I didn't. This ice cream was the creamiest, dreamiest textured ice cream I've ever had. And the flavor was so light, lemony, refreshing. Even my little girl, who generally doesn't like fruit flavored things, said, "This is even better than vanilla ice cream!" and proceeded to lick every drop off the paddle of the ice cream maker. Hubby and I were both amazed by how wonderful this ice cream was...if you haven't tried it yet, and you have an ice cream maker, add this one to the list!
Posted by Abby at 1:17 PM