My hubby celebrated his 36th birthday a few days ago. Normally he picks special foods for me to make for his day: a fun breakfast bread (or two), maybe a fancy bread for a picnic lunch, a special dinner, followed by his favorite chocolate cake with fudge sauce (an old family recipe from his grandma). This year, we were visiting my in-laws on his birthday, so we went out to lunch and hubby's mom cooked him a fancy dinner and baked his cake. I offered to make a special breakfast treat ~ my first time baking in someone else's kitchen ~ and he picked cinnamon rolls.

I used the all-purpose sweet dough from ABED, and although I was nervous at first, it was actually kind of fun to bake without my normal tools, kneading by hand, etc. I used 2/3 of a recipe to make a 9x13 pan of cinnamon rolls.

This morning, I knew the last third of the dough needed to be used, but I wanted to make something new. I'd first heard about pull-apart bread last spring, but had never actually seen a recipe until this one appeared on Tracey's blog last week. I thought it might be a fun use of our leftover bread.

So this morning, I rolled out the dough into a big (12x20") rectangle. I used my fingers to spread out two tablespoons of browned unsalted butter on the dough, and then sprinkled a little over 1/2 cup of sugar and 2 teaspoons of cinnamon on top. I cut the dough into six strips, stacked them, and then cut the line into six again. I dumped them into a 9x5 pan sprayed with cooking spray, poured the rest of the cinnamon/sugar from the counter on top of the loaf, let it rise for about 30 minutes and then baked it at 350 F for about 40 minutes.

This was a winner: super easy and we all loved it! 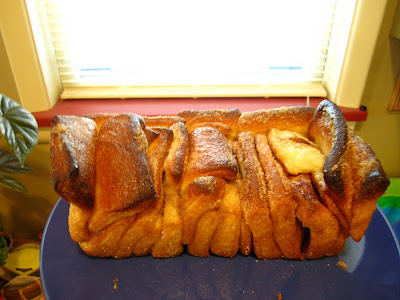