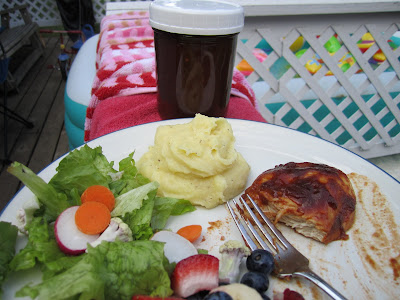 Our Twitter avatar chef for July is Ina Garten, otherwise known as the Barefoot Contessa, and Phyl picked her. I'm glad he did because I've heard a lot about her, but have never tried any of her recipes (unless you include my granola bars, which are an amalgamation of a ton of recipes including this one by Deb at Smitten Kitchen, who says hers were an adaptation of Ina's, but that's pretty convoluted...).

I had a long list of recipes to choose from, but eventually settled on something I could make with ingredients that I already had on hand: barbecue chicken and mashed potatoes.

I followed the recipe for Ina's barbecue sauce exactly, although I cut it in half because I was running low on several of the ingredients and it seemed to make a lot. Indeed, I ended up having enough to thoroughly coat four large chicken breasts and still fill up a mason jar. It's an easy recipe: lightly cook some onions and garlic in oil until translucent. Then add a bunch of stuff (worcestershire sauce, honey, soy sauce, hoisin sauce, tomato paste, cider vinegar, dijon mustard, chili powder, cumin, and red pepper flakes) and let it simmer on low for thirty minutes.

I'd forgotten to defrost the whole chicken which I have in the deep freeze, so I decided to just make chicken breasts. And then hubby had a bunch of chores around the house, so he asked me to bake the chicken in the oven rather than firing up the grill. I baked the chicken breasts, which had been marinating in the sauce for several hours, in a foil-covered glass dish for about twenty-five minutes, and then I broiled them for about five. They were perfectly done, and we really enjoyed the flavor. Even the kids gobbled up their pieces. I'm excited to try the rest of the sauce on future meats and meals. Hubby prefers smokier sauces, but still said this one was excellent; with my sweet tooth, this one was perfect for me.

I tried to make Ina's buttermilk mashed potatoes to go along with the chicken. I boiled the potatoes, pressed them through my food mill, and then added the 1/4 cup milk and 4 tablespoons of unsalted butter that she calls for. At that point, she says to "add enough buttermilk to make the potatoes creamy"...but my potatoes were already beyond creamy. I ended up just adding a splash of buttermilk plus some pepper (she says to add a teaspoon of salt, but mine were already quite salty from the salted water). Even with these changes, the potatoes were excellent.

Ina's followers seem to be a devoted lot, and after these two winning recipes, I can see why!
Posted by Abby at 7:17 PM