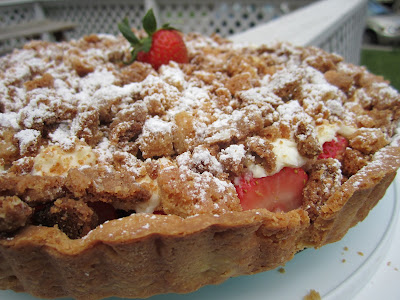 I'd never noticed what an alliterative cake this was until I was typing in the name: strawberry cream cheese crumble cake. How very appropriate for an English teacher!

Anyway, hubby's school had an end-of-the-year barbecue yesterday, and despite my sadness that he's done with school while I still have TWO FULL WEEKS left, I sucked it up and agreed to bake. When I asked hubby what he wanted me to make, he started listing off his favorite recipes, none of which were appropriate for a barbecue: bagels? scones? pizza? Seriously?

So rather than get into a big fight, I told him to look at our up-coming recipes for our Bake! twitterbakes and choose from there. He thought they all looked good, and then settled on this upcoming weekend's pick, by Kayte, strawberry cream cheese crumble tart. Looked good to me!

It was pretty easy to make the components the day before. NM cautions us not to assemble it ahead of time, although you can make all of the parts early.

The crust was the cookie dough crust. Normally, when I see that crust, I sub in his sweet tart dough which has been much more successful for me. The cookie dough crust and I did not get along when I made the Parisian fruit tart. However, that was from The Modern Baker, so I thought that maybe I'd have better luck with the one from Bake! It was easy to mix up in the food processor: slivered almonds, confectioners' sugar, flour, salt, unsalted butter, vanilla extract, and egg yolks. I pulsed and pulsed and worried that it was never going to come together and form a ball...but have faith, because eventually it did. The dough felt much better than the one from MB, not so crumbly, and I stuck it in the fridge as instructed. However, when it came time to roll it out, again it started breaking and tearing and I ended up having to piece it together. It was fine...definitely way easier than my last experience, but I still prefer the sweet tart dough for its supreme ease of rolling. And like the last time I made the cookie dough crust, it was quite crumbly.

The cream cheese filling is easy: cream cheese, confectioners' sugar, lemon zest, and vanilla extract, all mixed in the trusty stand mixer. The only issue I had with this one is that I made it early, left it in the fridge over night, and when I went to scrape it into the tart, it was way too hard. Because it's so easy to whip up, I think I'll just make it the day-of next time.

The crumb topping was a bit odd: flour, sugar, baking powder, cinnamon, salt, and chopped slivered almonds, all combined with melted butter. Then the whole thing is placed on a baking sheet and baked for 20 minutes. (It's supposed to be baked at the same time as the crust, but I hadn't read ahead to know that the crust benefits from an overnight rest - in the pan - before baking, so I baked it the morning-of...something to remember for next time!) This was my least favorite of NM's crumble topping, and I'm not sure why. It felt like it wasn't sweet enough. Or maybe it baked too long. 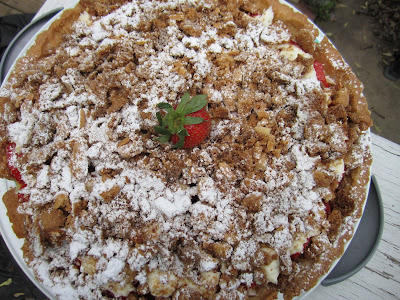 This was a huge hit at the party. People were still raving to hubby today ~ except those who didn't get any, who complained. =) My hubby managed to grab one piece for photographing before it was all gone, and the four of us split it. Although it wasn't my favorite, the rest of my family loved it. 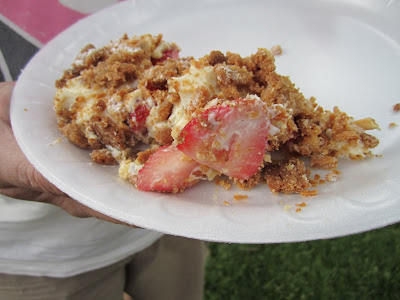