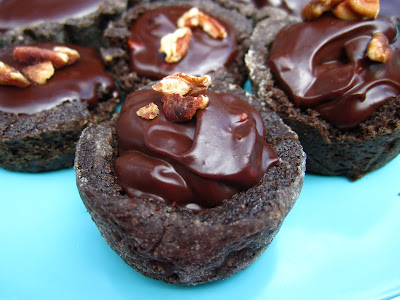 These little tartlets were one of my biggest challenges to-date.

I was looking for a quick and easy dessert to bring to a friend's 30th birthday party this afternoon. I wasn't sure whether or not she had a birthday cake already planned, so I wanted to pick something fun that would go with another dessert. Browsing through The Modern Baker, I settled on the chocolate caramel pecan tartlets; they looked tasty and I had all of the ingredients on hand.

My first hiccup with these was that I was counting on using some of the leftover sweet tart dough that I have in my freezer. Upon closer inspection, I discovered that these tarts actually call for the chocolate nut dough. While I was willing to compromise, hubby was pretty convinced they needed the chocolate dough, and since I'd never made it before and we didn't have any plans this morning, I decided to just make a batch. The tart dough was relatively easy: slivered almonds, sugar, flour, cocoa, baking powder, salt, butter, eggs, and water, all combined in the food processor. I used extra-large eggs, so I thought maybe I should omit the water because of the extra moisture. I should've listened to my instincts, since the dough ended up being quite wet.

While the dough was cooling in the fridge, I made up the ganache. I realized that I didn't have quite enough chocolate, so I scaled the recipe down (I made 3/4 of the recipe). NM says to use a large saucepan because the caramel boils up...it did, but I think the pan I used was way too large, so it made it a little awkward to cook. And while I was cooking the sugar and water and simultanously heating the cream, I got distracted with the dishes and ended up scorching the cream and having to start over with that part. Anyway, the ganache wasn't difficult: sugar, water, cream, milk, salt, bittersweet chocolate (I used 60% and 72%), and unsalted butter. I probably should've waited to make the ganache, since it was completely hard by the time the crusts were ready.

Ah, the crusts. I rolled out the wet dough, using quite a bit of flour to prevent sticking and tearing, and used a small round cutter to cut circles. I used my mini-muffin pan, one of NM's suggestions for mini-tarts. It was only after I put the pan into the oven that I realized I'd forgotten to pierce the crusts with a fork. I pulled them from the oven, where they'd already begun to puff up, and quickly pierced them. Too late of course; they were still quite puffy. I used a plastic measuring spoon to push the still warm dough down to make a little cup. I thought I was in the clear, until I tried to remove the little delicate forms from the mini muffin pan. There's a reason tart pans have a removable bottom. I was able to salvage a few of them, and then I used the remaining 1/4 of the dough (still in the fridge) to make two 4" mini tart crusts.

After the crusts were finally ready, I rewarmed the ganache over a pot of gently simmering water on the stove, which went surprisingly well. I filled one 4" tart crust with plain chocolate, and then added the toasted pecans and filled the rest of the tart crusts.

I prefer the bittersweet chocolate tart with sweet tart crust. These were pretty dark; I would've preferred them with some sweetened whipped cream or ice cream. And I don't think I'll make this crust again. And I definitely won't use the mini-muffin pan again (unless someone has a foolproof technique for removing the tarts...?). Still, they were pretty tasty and went quickly at the birthday party, so all's well that ends well, I guess! 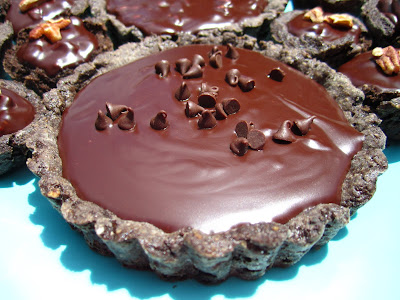