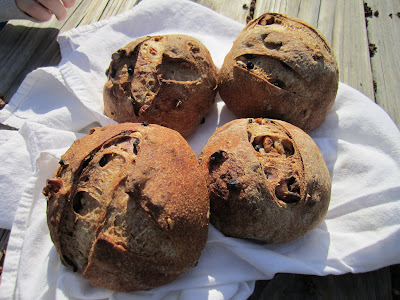 Who would've thought that our final bread for April, a bread with "things" in it, would end up being my favorite for the month? I do not generally like "things" in my bread...not fruit, nuts, big chunks of spices. And this one has all three!

This is supposed to be Hazelnut and Fig Bread with Fennel Seeds and Rosemary. I couldn't find hazelnuts, and I don't like them anyway, so I decided to sub in walnuts. And then the figs that were in my pantry ended up being really old and hard; I was able to salvage about half as much as I needed. A friend of my mom's recently gave her a giant bag of currants, which she passed on to me, and I've been dying to use them in a bread. So I subbed in currants for the remaining weight of figs.

So here we are with Walnut, Fig, Currant, Fennel, and Rosemary Whole Wheat Bread. This is a one-day bread from the straight dough section. I mixed bread flour, whole wheat flour, instant yeast, salt, fennel seeds, rosemary, and water, for about three minutes. Then I added in the nuts and fruit; I had to incorporate them by hand. After a two hour rise with one fold, I shaped my half-batch into four mini-boules (about 8 ounces each). I baked them for about 28 minutes at 425 F.

These were surprisingly tasty, especially with a little butter. They were a strange but flavorful addition to our dinner (cider-baked ham, chantilly potatoes, cucumber salad, and angel food cake). 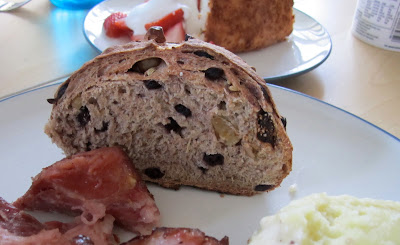