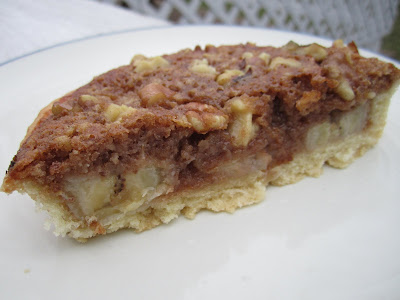 Hubby says this tart is like being the slowest guy on the US Olympic 4x100 relay team: it's our least favorite of the Modern Baker tarts so far, but that's not saying much given how ultra-amazing the others have been. It's still pretty good.

I had enough sweet tart dough left for two mini tarts; I decided to make one banana walnut tart and one roman almond and pine nut tart.

The filling for the banana walnut tart came together more quickly than any of the others so far: brown sugar, walnuts, softened butter, egg, cinnamon, vanilla, flour, and baking powder are all mixed in the food processor. A banana is sliced and placed on the crust floor; the filling is poured over the bananas; chopped walnuts are placed on top. I made 1/4 of the filling recipe and used it all...this was a little mistake, as the filling overflowed just a bit in the oven (didn't make that big of a mess, though). I baked it for 26 minutes, until the tart was golden and set.

The sweet, jammy bananas were yummy, the walnuts provided a nice crunch. I doubt I'll make it again, but only because there are already so many of the must-redo-and-soon list.
Posted by Abby at 7:31 PM