Panettone: the bane of my existence

According to encarta, "bane of existence" means "something that continually causes misery or problems."

Yep, that about sums up panettone, BBA Challenge Bread #24, for me. Okay, so it does not fit the actual definition of bane: poison or causing death, but man, this bread sure has been challenging for me!

First off, panettone requires a wild yeast starter. I started my starter over three weeks ago, in order to give me plenty of time to get ready for the sourdough set. And then I realized that I would also need it for the panettone, so my leisurely attempts at getting a working starter suddenly had a lot of pressure attached to them. I finished pain de campagne and then pane siciliano, and suddenly I was trapped between bread #23 and bread #24 until I could get my starter working. (One could argue that I could've just moved ahead and come back to panettone once my starter was going well, but I have always been physically unable to cheat. Seriously. Ask my little brother, who used to make tons of fun of me for refusing to take warp zones on Mario Bros on our old Nintendo . . . he considered it part of the game, I considered it cheating. It's a disorder.)

Anyway, I finally got my starter to a place where I thought I could proceed with the "barm" Peter Reinhart calls for in the panettone. So last night, I mixed the starter with a little warm milk and some flour. It took a long, long time to start to get bubbly, but given how cold it is here, I guess that's not really a surprise. Last night, I also soaked some dried fruit (apricots, apples, and cherries) in some whiskey and vanilla and lemon extracts. Not a lot of thought went into any of these ingredients; they were just the only things we had in the house out of the choices Peter Reinhart gives us.

After reading a couple of so-so reviews of panettone from other BBAers, plus knowing that hubby and I don't really enjoy breads with fruits (see cranberry-walnut celebration bread and cinnamon-raisin-walnut bread, both of which made it into the "will not make again" category), I decided to make a half recipe. Today, after work, I mixed the barm, the rest of the flour, the salt, the sugar, the yeast, and the minimum amount of water, and let them have a longish autolyse while I put the kiddos to bed. Then I added the butter (which I'd forgotten to soften) and the liquored-up fruit and tried to knead with my mixer. Ha ha. And then tried to knead by hand. Ha ha. And then added a bunch of flour. And then a bunch more. And then a bunch more. And then plopped back into the stand mixer and added a bunch more flour. And then thought, "Why in the world would he have us add so much water when there's also liquid in the fruit/alcohol mixture?!"

I reviewed the recipe in my head, and then checked back in the book. Sure enough, I had halved everything except the water. Even with using what I thought was the minimum amount (2 oz), it was still .5 oz more than if I'd used the maximum amount and had actually halved the recipe (1.5 oz). I am so bummed. Weeks of waiting to get to this bread so I could move on to pizza napoletana and Portuguese sweet bread and all of these breads that I am so excited to try. Weeks of stressing over my starter so I could make this. Days of getting everything ready. Argh!

I gave up when the dough started to pull off the sides of my bowl; I just didn't want to add any more flour. I watered my hands and transferred the whole mess into a bowl for proofing. Surprisingly, it actually rose! (Okay, I'll admit I cheated just a bit and kept the bowl on my stovetop while I was baking cookies; the stove did only register about 75 degrees, though; it is just so cold here!)

So I went the muffin cup route (about 2.25 oz in each) with muffin liners (for no other reason than that my muffin tin is hard to clean when you don't use them and really, who wanted to put in extra effort at this point?!) and put the leftover 7 oz in a small baking dish with a parchment collar. The dough was still incredibly sticky as I started to form my mini-boules, although after sitting for about 3 or 4 minutes, it felt much more normal.

Anyway, now it's late at night, so the pans are going into the fridge and tomorrow, we will see what we can see! Oh! And both of my cameras were out of batteries when I went to take pictures of the panettone process . . . coincidence??

*****
Baked my mini-panettone this morning: 25 minutes for the muffins and 35 minutes for the small baking dish to achieve the desired temperature. It is a little disconcerting to eat bread out of a muffin paper; you expect it to have the sweetness and airy/crumbly texture of a quick bread. So how did they taste? Meh. So-so. Luckily I can tell that even if I had made them without all of the mishaps, this is just not my kind of bread. 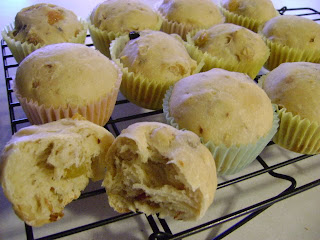 So we'll set panettone aside and move on to pizza! Hurrah!

**UPDATE: Although clearly not my family's style of bread (my kids and I ate about half of one muffin this morning), these completely disappeared at my lunch table! One person called them "delicious" and a couple people asked if they could have seconds. So I guess they weren't too bad!
Posted by Abby at 8:42 AM