My husband is sick of this starter for two reasons: my constant obsessing and the really sticky messy dishes it creates every day. (Don't be fooled; I'm the official dish-doer in this house, but he does the last few before bed each night, and, as feeding my starter has been my before-bed ritual for the last few weeks, the dishes have fallen to him.)

I started this project three weeks ago, knowing that sourdough breads are coming up relatively soon and that panettone, which is coming up even sooner, also requires a barm. I read a lot on this topic because I have zero experience with sourdough. In fact, before reading the BBA, I didn't even know it was made from wild yeast . . . or what wild yeast was, for that matter. But apparently it is, and apparently wild yeast is what gives sourdough its sour flavor, and apparently wild yeast means that you create the yeast yourself, out of flour and water, and don't just use the convenient little jar. Who knew?! Sounded cool to me, though!

But I also learned from my reading that this was (or could be) a fairly challenging process, so I wanted to start early. I found this awesomely detailed and helpful post from Paul at Yumarama, which I studied and read and bookmarked and read and studied and read some more. I went the pineapple and rye flour route, which seemed to have some success from some novices. So I started. And things went pretty well. For the first three days, I added my pineapple juice and my rye flour to my mason jar, stirred it all around, covered it, and sat it on the counter. 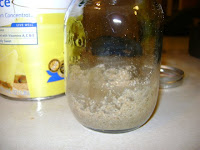 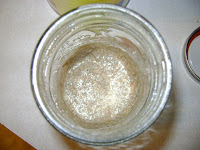 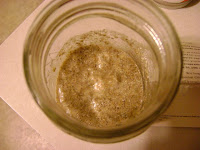 The fourth day, I switched to KA bread flour and I also noted a change: "doubled over the course of the day! beginning to smell a bit yeasty; texture is changing too: not gloppy liquid, but now like a very very wet dough with definite strands obvious when I spoon it out to wash the jar." 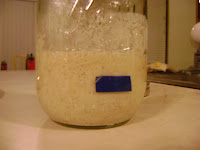 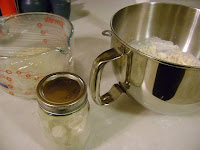 very proud of myself to be simultaneously working on
my own starter, multigrain, and pain de campagne
The fifth day, I wrote: "very bubbly, but just over the tape line; wondering if it peaked and then fell when it ran out of food (as Paul @ Yumarama talks about); I'll have to watch it more closely tomorrow to see if it's growing, peaking, and sinking because it needs more food; pineapple smell is almost gone, and with the exception of a slight fruity tinge, it smells like yeast!"

And then things fell apart. (This is also when I stopped taking pictures becuase, well, there wasn't anything happy to photograph.) It stopped growing much (if any). I cleaned the jar really well so I could see if it was indeed peaking while I was at school; it very clearly wasn't. I started reading a lot more. I tried giving it a dose of rye flour. I tried changing the feeding ratio (switching to 1:2:2, starter:water:flour). I tried putting it on top of my fridge (which my mother-in-law, who was visiting for the weekend, told me was the warmest place in my house; it was quite a bit warmer than the rest of my kitchen). Still: nothing. I began to think it might actually be done and ready for the garbage.

So I started a new jar, this time writing down every step in my notebook and taking meticulous notes of what I'm supposed to do and when. I started using bottled water, as some people talked about. And I carefully mixed the starter and water before adding the flour. And I searched my house with my thermapen (mine's lime green), looking for the true warmest place in my house. Turns out it's on the top of my dresser in my bedroom; who knew? It maintains a temperature of about 70 - 74 degrees, which is really important when our high temperature outside has lately been around 8 degrees and our main floor is usually in the low to mid 60s. I also talked my husband into letting me keep the temperature set at 65 degrees overnight (usually it drops to 60); he's very agreeable to anything that gets this project over and done with. (Including letting me borrow his beer glasses, since my small mason jars were extremely annoying to clean and I thought, since beer is also made with yeast, that they might give me luck!)

And . . . it seems to be working!!! I have two, yes TWO, starters that are bubbly and seem to be doubling on schedule! Aren't they beautiful? 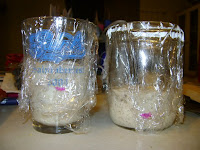 today (old starter on left; new one on right)

In fact, I decided that my original one was performing well enough to graduate to being used in a barm for my panettone . . . fingers-crossed that it rises as it's supposed to tonight!
Posted by Abby at 7:45 PM