If I had been blogging at the beginning of 2009, I would only have been able to talk about three yeast breads I had ever baked in my life: a loaf of whole wheat back in college, another one when I first received my Kitchen Aid, and an (extremely poor) attempt at cinnamon rolls. None of them turned out especially well.

Last spring, I began reading Smitten Kitchen and found Deb's post about Peter Reinhart's bagels. I had never heard of Peter Reinhart...I read through her descriptions and decided to give bagel-making a try. It was awesome! So I decided to try challah (another recipe that Deb posted). And finally, following a link to another link to another link, I stumbled on Nicole's Pinch My Salt and (more importantly) the link to her Bread Baker's Challenge. I poured over the postings for the first ten or so breads and followed a bunch of links; I read up on Peter Reinhart. In short, I became a little obsessed and after about a week of this, I decided to order my own copy of the book. On August 31, I baked my first Challenge Bread.

And now, here I am, welcoming in the new year with bread #21, pain à l'ancienne. According to Peter Reinhart, "The technique by which this bread is made has tremendous implications for the baking industry and for both professional and home bakers....As in any facet of life, this is an exciting place to find oneself, like standing on the end of the world, facing the wods, as so often showed up on ancient maps, 'Unknown Kingdoms Be Here'" (p. 191). He calls pain à l'ancienne "magic," "very special," and "another level" of baguettte (p. 19 - 23).

Pain à l'Ancienne is all about delayed fermentation. The method is unlike anything I have ever read about or tried and, after reading some very mixed reviews from other BBA bloggers, I was a lot excited and a little apprehensive about trying it. 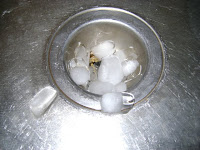 I started with bread flour (I finally picked up some more King Arthur; didn't want to mess around with this all-important bread!), yeast, salt, and ice water. Yep, I had to ice my water until it hit 40 degrees before mixing it with the rest of the ingredients. I added the starting amount: 19 ounces. 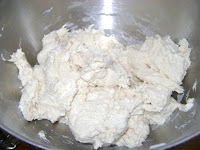 I mixed it for about a minute with the paddle until it all came together and then switched to the dough hook for a little under 5 minutes. This is supposed to be an incredibly sticky dough. People talked about having to pour it, like liquid, out of the measuring bowl. Peter Reinhart says, "This dough is very sticky...so it is best made in an electric mixer....The dough should be sticky on the bottom of the bowl but it should release from the sides...." 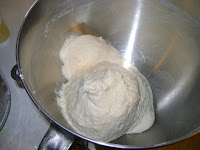 Finally, I got it to sort of stick to the sides. 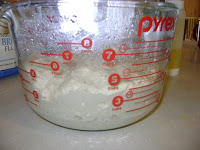 I poured it into my new 8 cup measuring cup - purchased so it would be easier to tell when the dough had doubled - and put it immediately into the fridge. 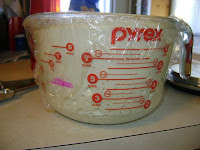 Here it got weird again. Everyone else posted about how their dough did not rise at all in the fridge. One person even wrote about their dough seeming to deflate. However, when I checked on mine the next morning, it had clearly doubled already! Is it because I didn't put it in the back of my fridge? Because we open our fridge too often? Is the fridge not set cold enough? Is it because I just opened a fresh new jar of yeast? I don't know, but I searched and searched to try to determine what to do and couldn't find anyone else talking about this happening.

So, knowing that with some other doughs that double too quickly, Peter Reinhart suggests lightly kneading them to degas them and then letting them rise again, that is exactly what I did. About three hours later, it had doubled again. 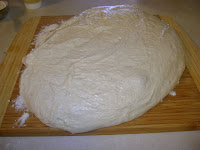 I poured it onto my counter covered with 1/2 cup of flour (this time, it literally poured) and tried to stretch it into an oblong. It wasn't very successful. 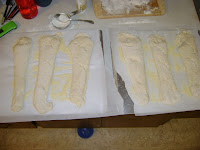 But I proceeded. I dipped my bench scraper into cold water and used it to divide my dough into six pieces. And then transferred the pieces onto a cookie sheet covered in parchment paper and semolina. I attempted to score them with my usual razor blade; didn't work. So I tried the scissor technique mentioned in the book; way easier. Knowing we wouldn't have time to eat the bread that day (it was just a couple of hours before our New Year's Eve party), I covered the two sheets with plastic wrap and put them in the fridge.

I took them out this morning, dying of curiosity. They hadn't grown much, if at all, so I was happy about that. I let them sit on the counter for a little over an hour while I prepared my oven for hearth baking. Hubby and I have quite a system in place for team-hearth-baking, and I'll say that it's way easier than trying to do it on my own! It went better this time than ever before: our loaves turned out much more golden than they've been in the past.

17 - 18 minutes at 475 degrees and the bread registered 210 degrees...pretty close to perfect. Luckily we only had to wait 20 minutes before digging in. I could not believe the size of the holes! Definitely my biggest success so far.

This bread was yummy: it's amazing how the simple ingredients of flour, water, salt, and yeast can develop into such a creamy, buttery, rich taste sensation. And surprisingly (to me - I always prefer my bread warm enough to melt butter), when we had some more bread a while later (the bread only came out of the oven four hours ago and we've already devoured two loaves), it was even better.

Hubby's comment? "You haven't wowed me with a bread in a long time, but WOW." 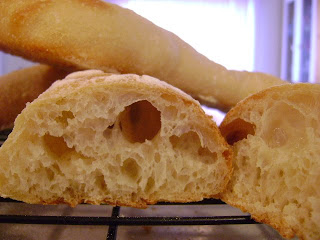