Wahoo for bread #22! I have to admit to feeling both excitement about being over halfway through the book and also a little nervousness . . . whatever will I do when I'm finished?!

I made my pâte fermentée last night and, even though I was really careful to put it in the very back bottom coldest corner of my fridge this time, it had still exploded by this morning. Do we just not keep our fridge cold enough? 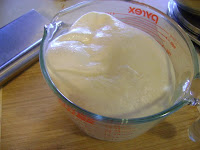 After the pâte fermentée had sat out for an hour, I combined it with the rest of the flour (bread and whole wheat), yeast, salt, and water. I mixed it for about three minutes in the stand mixer, but it was really stiff and rocking the mixer all around, so I pulled it out. The dough was really smooth, not tacky at all, so as I kneaded by hand, I kept dipping my hands in water to try to increase the moisture a bit. It never really did get very tacky.

Hubby happened to ask, "What is that windowpane thing?" right as I was checking, so I actually got a picture (not a great one) for once! 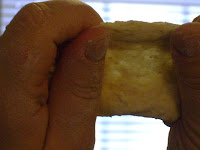 I let it rise for two hours, and then divided it into three and proceeded with shaping, which is, of course, what this bread is all about. I divided it unevenly, but didn't want to mess with it, so I formed the two bigger pieces into batards and the smaller into a mini-boule. I turned the batards into an épi and a fendu and the boule into a mini-couronne. The shaping was, hm, how should I put it? Not a success? That would be putting it mildly. I wasn't even going to include a photo, but I will if you promise not to make fun of me. 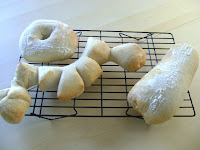 The fendu and the couronne were really fine except that, even though I pressed the lines twice and filled the depressions with flour both times, they still disappeared after baking. The épi was another story altogether. We were trying to rush out of the house to run errands after nap and bread-baking, but before dinner. It doesn't leave us with a lot of time. So I just hacked away at the baguette-shaped loaf, but couldn't quite figure it out and . . . oh, it just didn't look anything like a sheaf of wheat! Actually, now that I look back at the photo, it looks kind of like a caterpillar. Maybe I should pretend that's what I was making all along . . . .

But the baking went great, and we enjoyed the bread with a pasta e fagioli soup for dinner tonight. I really liked the way the épi broke into little rolls, so I think I'd like to experiment with the shape again . . . some time when I have enough time to be more careful and study what I'm doing!

The texture was unexpected: denser, smaller crumb, softer crust. The flavor was good, nothing fantastic. As hubby said, it's better than anything you'd ever buy at a store around here, but not as good as many of the other breads I've made, and therefore we probably won't make it again. Still, hubby and the baby did manage to polish off the whole épi (okay, I helped a little, too) and part of the mini-couronne.

While I was making the pain de campagne, I also made another loaf of Peter Reinhart's multigrain bread because we were all out of sandwich bread and I've been wanting to give it another try after the disaster last time. For the soaker, I again used wheat bran, polenta, and rolled oats. I actually made it first thing in the morning and made the rest of the bread at night, figuring the ten hours we were out of the house was the equivalent to ten hours overnight.

In the evening, I combined the soaker with the rest of the ingredients: bread flour, salt, yeast, brown sugar, honey, milk, and water. I'd also made some brown rice for dinner last week and frozen a couple of packets to use, so I dropped one of those in, and then added an ounce of flax seeds. When adding the liquid, I tried to avoid the ultra-wet fiasco of last time, and I only added three ounces of milk (instead of the four he calls for) with the six ounces of water. The hydration seemed just about perfect: still pretty tacky, but definitely workable. I let the ingredients rest for about 20 minutes while we did bedtime, and it only took about three or four minutes of kneading for it to come together. So much better than last time! 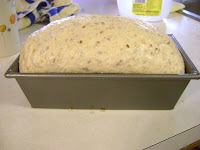 I also thought about breaking it into two smaller loaves, given how large it grew last time, but I ended up going with my 8 x 4 pan, and it was perfect. It made a beautiful loaf of bread: hubby enjoyed some toast for a snack and the kids had sandwiches for lunch. I really liked the crunch and flavor of the added flax seeds. I just knew this bread had potential; I'm so glad I made it again! 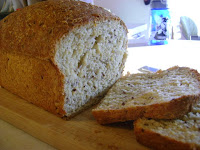