I can't believe that last year at this time, I'd only baked three yeast breads ever and this week alone, I have baked four! I wanted to use my winter break to work on my BBA Challenge and managed to get #20 multigrain bread and #21 pain a l'ancienne finished. I also remade casatiello for our friends' New Year's Eve party and then remade cinnamon buns for a New Year's brunch with a group of my girl friends from high school. 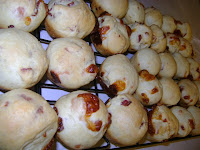 One thing I noticed in my recreations was that it was kind of freeing to bake without photographing every little step. Unlike many of the food bloggers I read, I am not a photographer. I have a little point-and-shoot digital camera that I use mainly for taking quick shots of the kiddos. Although I will admit that after months of perusing food blogs, I have started to get an itch to learn more about photography and perhaps invest in a slightly better camera.....

In fact, while I enjoyed not photographing everything, I couldn't resist snapping a couple of quick pictures of my casatiello, which I attempted in muffin tins (regular size and mini) this time. They were really cute!

When looking back at my original posts for casatiello and cinnamon buns from way early on in the Challenge I was disappointed in myself; while I gave detailed descriptions of how things went for me, I was very reflective on the process, while not including any specifics that would've been helpful to recreate the bread (for example, which ingredients I used when he gives a choice, how long things needed to cook, etc.). Gr. I'm hoping that I've learned my lesson, and that my posts in the future will include more specific concrete details, both to help others who may be reading and to help myself when I want to make a bread again . . . which I most definitely will!

Results: Pretty dry and nowhere near as good as I remembered. Is it because they really didn't taste as good as last time or because I've made so many other wonderful breads since then?

Some notes about cinnamon buns:
* used buttermilk (1/2 cup of dry mix; 9 oz water) - way too wet, should've used 8 oz water
* used unsalted butter not shortening
* used bread flour, not all-purpose
* dough took forever to rise; was still really sticky and not as nice to work with as I'd remembered (too much water!)

I remembered that I didn't really love either the cinnamon bun glaze or the sticky bun caramel from Peter Reinhart, and that I found Pioneer Woman's orange marmalade rolls too sweet.

Result: Delicious dough (as I remembered) and much better glaze! Yum yum! I will be making these yet again!