My son fell in love with trains when he was really young. Happily, before his second birthday, I found this pan on clearance at a store's going-out-of-business sale. So my guy has gotten a train cake for his past three birthdays (by request ~ he's pretty predictable!).

The cake is always adorable...but sadly, always dry. I've experimented with different bundt cake recipes: a couple from Cook's Illustrated, an old family recipe. But by the next day when I decorate them and we eat, they've always been dry and a little tasteless.

Finally I decided that maybe the problem was that I was cooking bundt recipes, which are often glazed to hold in the moisture. I wondered about pound cakes, which Nick Malgieri describes as being moist without needing any sort of glaze. I'd loved his New Orleans praline pound cake, so I decided to try the vanilla bean option from Bake! Phyl had already made this and commented that the vanilla flavor wasn't very strong, so although the recipe says to use the vanilla bean in place of vanilla extract, I decided to use both. And then I used another vanilla bean in the Bake! meringue buttercream frosting.

The cake was still not moist, but it was way better than it's been in previous years: not too dry, great vanilla flavor, and (key with a pan like this) popped out of the pan easily without much mess. I think pound cake is the way to go! 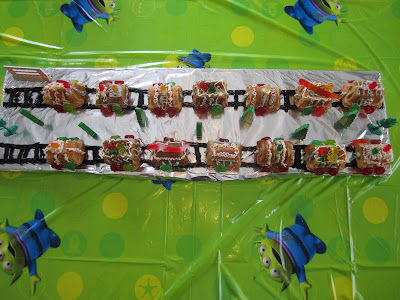 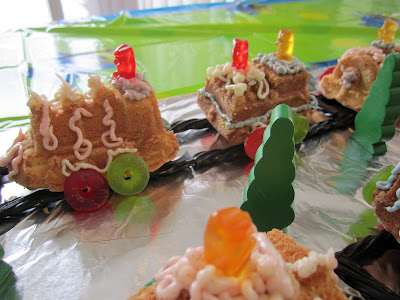 We decided to have a birthday brunch for the little guy because he loves all breakfast foods. I made three pans of BBA cinnamon rolls, two NM ham, egg, and cheese tarts, ATK's blueberry pancakes, a fruit salad, bacon and sausage. Lots of fun and not many leftovers...a success! 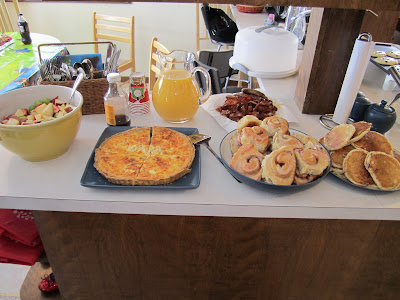