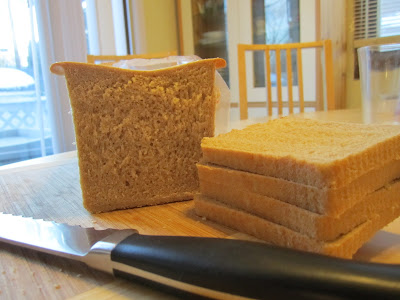 We really enjoyed both the pain de mie and the toast bread from Hamelman's Bread, but because I like to feed my family whole grains, I was eager to try adding whole wheat flour.

When hubby requested that I make chicken noodle soup and grilled cheese sandwiches (with pain de mie, of course!) during his parents' visit, I decided it was the perfect time to try it with whole wheat.

I had a big breakthrough with this recipe, too. I used Hamelman's instructions on baker's math to rescale the recipe, and for the first time, I feel like I actually understood what I was doing. Having struggled with getting the straight pullman pan corners, I decided to try 3 pounds of dough in the pan this time. I scaled the recipe for 3 pounds and was on my way!

I followed Hamelman's pain de mie recipe, but used half whole wheat flour (actually part white whole wheat and part whole wheat, finishing up two bags of flour that I had in the cupboard). The only problem was with my scale (again!): right as I started pouring water, my scale turned off (GR!), so I ended up with too much water and had to put in extra flour to compensate. I think I ended up with more than 3 pounds of dough. And then I forgot about the bread while it was doing its final proof and came to find it had exploded out of the sides of the pan! We really struggled to get the lid off, but finally did. I punched down the dough, reformed it, and put it back in the pan.

The next challenge was that this last (unexpected) rise happened during bed time, so it overproofed a little again. I ended up with not only square corners, but square corners with an extra T at the top. Closer...at least I discovered that I really could get square corners. :P

Anyway, the bread was delicious and the grilled cheese sandwiches were the best ever. Next time I'll try it with just slightly under 3 pounds of bread, but will still use at least 50% whole wheat.
Posted by Abby at 8:58 PM