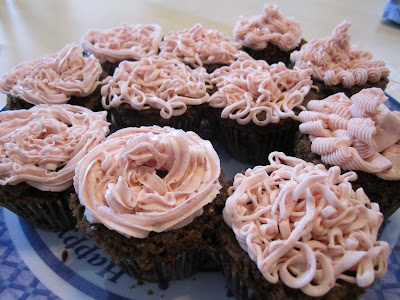 My mother-in-law requested cheesecake for her birthday. I was eager to try it, but was worried the kiddos wouldn't like it.

Ever since I received my birthday copy of Bake! last week, my kids have been begging me to make the cupcakes which are featured on a large picture in the middle of the book. So I decided to make a half-batch of chocolate butter cake cupcakes for them to eat while the adults enjoyed the cheesecake.

The recipe was time-consuming but not difficult. The most challenging part for me is that NM starts with a base recipe and then gives variations on later pages...the chocolate was the variation I picked. So I had to bounce between pages because all of the ingredients are listed on the variation page, but most of the method is listed on the original recipe page...but then there are some variations to the method listed on the variation page, too. Seemed to increase the likelihood of making mistakes, especially for a distracted baker like me. Luckily I baked these when the kids were in bed, so there were no distractions and I didn't mess up! =)

The side note suggests that a half-batch should make about 9 or 10 cupcakes. I made 11, and I should've made 12. My cupcakes spread out over the sides of the pan and I couldn't get them out without breaking them. I ended up cutting out an outline around the outside of the muffin cup to get them out. My in-laws, hubby, and I were happy to eat the scraps, but I was still a little disappointed at how rough they looked.

The next afternoon, I made the meringue buttercream frosting recipe also from Bake! ~ another first for me. I started with egg whites, sugar, and salt, and then added soft butter. The kids had requested pink frosting, and I decided that instead of using food coloring, I would try NM's fruit puree variation. I made a little strawberry puree and mixed it with the buttercream. It was sooooooo tasty; I had to fill the mixing bowl with water to avoid licking it out! Then I played with my new-to-me pastry set to decorate them with ribbons of frosting.

These were a huge success. The kids often lick off frosting and leave cake/cupcake on their plates, but they devoured these. And my father-in-law and hubby had some, too, even after the cheesecake! I'm looking forward to trying the other variations of both cake and frosting. 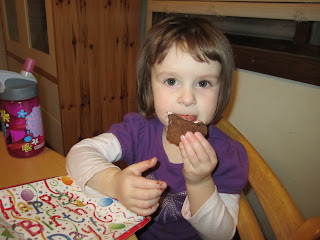