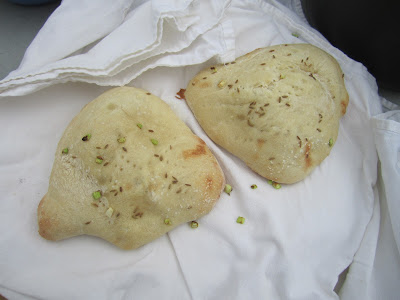 When my friend Phyl found out that he was hosting, he proposed a Twitterbake of butter chicken and naan. We were all supposed to make it on a Thursday...and then were all too tired/busy to cook. And then we were supposed to make it on Friday. So Thursday night, I quickly mixed up the dough with warm water, yeast, flour, and salt, and kneaded it on the counter until it was smooth. You're supposed to leave it on the counter for a couple hours or refrigerate it overnight; I stuck mine in the fridge. And then we got invited to a last-minute barbecue at our friends' new house...couldn't pass that up! So I missed out on the Twitterbake once again, and my naan dough lived in the fridge for an extra day.

Finally on Saturday, even though we were heading to the ballpark for dinner, I made the butter chicken and naan. Because both naans in BwJ are made with the same base dough, I decided to try both recipes: Persian naan and oasis naan. And because I'd only made a half-batch of the dough, I made one large Persian naan and two small oasis naan.

The oasis naan is cut into small pieces, rolled out into six-inch circles, punctured with a fork, and then sprinkled with scallions, kosher salt, and cumin seeds. Then it is baked for a short time in a 500º oven on a preheated baking stone. Apparently I didn't puncture my bread vigorously enough because mine puffed up quite a bit...which we actually liked. I will blog the Persian naan when it comes up, but I will say that all of the adults preferred the puffy oasis naan, and it was the perfect tool to eat the butter chicken.

The butter chicken recipe was easier to make than our standby recipe (curried chicken with tomato almond sauce) and the flavor was very similar; I did miss the peas and onion chunks, though. The naan was delicious; our usual naan recipe is brushed with ghee, so we missed that a bit, but cooking these in the oven was much less hectic than trying to do it on the stovetop as my other recipe calls for. And we really loved the puffy texture; I think, with the exception of the missing ghee, that we have a new favorite naan recipe.

Indian butter chicken and naan is not a traditional tailgating meal, but it was delicious and enjoyed by all! 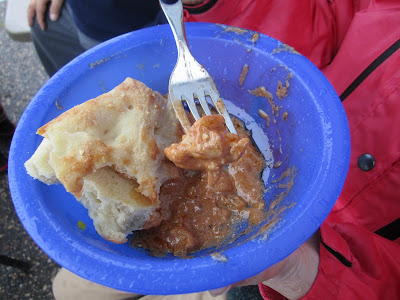 Check out the recipe here on Phyl's blog or here on Maggie's blog. Or better yet, buy the book! And check out other TWDers' naan experience here.
Posted by Abby at 6:00 AM