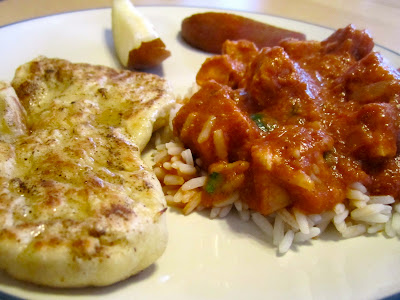 I've found another use for my ghee! I've always loved naan, although I haven't had it in a few years. When I saw Tracey's post about homemade naan a couple of weeks ago, of course I bookmarked it.

And now that it's spring break, and I have time, I was happy to make Cook's Illustrated's tikka masala, white rice (with ghee in place of butter...soooo good!), and naan! I followed the recipe and instructions for naan on Prerna's site, and it was pretty easy.

I whisked flour, baking powder, baking soda, salt, and sugar together. And then I combined some warm milk with some of my homemade yogurt, and mixed it in with the dry ingredients. The dough rested for two hours.

I dumped the dough out onto a lightly floured board and attempted to knead it; the dough was really wet and sticky and I had to flour my hands and the board quite a bit...but after a few minutes, it became nice and satiny. I split it into eight small balls, which I flattened with my hands and then sprinkled with garam masala. My hubby and I are new to garam masala, and I think it's fair to say that we're somewhat addicted. I'd actually pulled out some other spices to experiment with as well, but we just couldn't break away from the garam masala, although I did end up sprinkling on some kosher salt, too. I brushed a little water on the other side and then cooked it, covered, in a skillet for about a minute. Perna suggests cooking the other side above the open flame on a gas stove, but for some reason, one of my burners wouldn't light and I was using the rest to cook dinner, so I just cooked both sides in the skillet.

It was awesome and easy. I brushed some ghee over the naan after taking them off the stove. I can honestly say that I could eat this stuff every day; it was that good. I was really surprised that neither of my kids liked it, but my hubby and I were more than happy to finish theirs. This recipe will be a frequent attendee at our dinner table!
Posted by Abby at 7:25 PM