My mom came over for her birthday dinner last night. I'd called her earlier in the week and said, "I'll make you anything you want for dinner...what would you like to order at Abby's restaurant?" She said (in typical mom form), "Oh, anything you want to make is fine! I don't want to have to pick. I just want it to be easy for you! Whatever's no work! We can even order in pizza!"

And after a few more minutes of me throwing out suggestions and her vetoing them, she said, "Ohhhh, how about some of your new homemade pasta? And that cheesecake you posted?? And garlic bread?" Sure, Mom! =)

For my birthday (in addition to a fabulous new apron and an heirloom cookbook of my husband's family's recipes), my in-laws gave me Food & Wine's book on Pasta. It is awesome...it has a section on making homemade pasta, Italian pasta dishes, Asian pasta, American pasta, super fast pasta. I decided to try their basic egg pasta recipe. 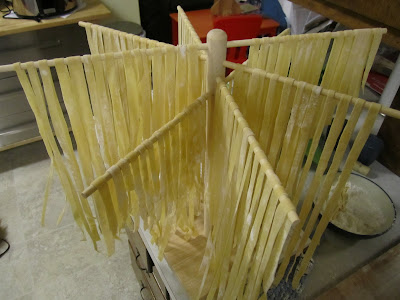 They list egg and flour quantities for 3/4 pound and 1/2 pound of pasta, but I wanted to make a full pound. They call for extra-large eggs; I only had large. Plus they indicate that you should add 2 extra tablespoons of flour if you're using the food processor method (which I was). They give a really nice description of how to tell if your pasta dough is ready, so I ended up going entirely by feel this time. I ended up using 4 large eggs and about 3 cups of all-purpose flour.

I let the dough relax, wrapped in plastic, for an hour while I worked on my mom's cheesecake, although they say the resting stage isn't necessary if you're going to roll the dough by machine (which I was). The dough rolled out easily; I learned my lesson with flour last time. My pasta machine handbook says to roll out to 4 or 5 for fettucine; the cookbook says 6. I decided to try it, and I ended up with eight sheets of very thinly rolled pasta. 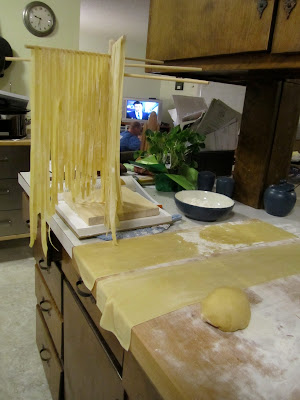 They claim that, even if you roll by machine, you should never cut by machine. After my major difficulties with using my spaghetti and fettucine cutters the last couple of times, I was actually happy to read this. I used my pizza wheel to cut the folded sheets into 1/4 inch strips. It was when it was 10:00 at night and I was hanging each strand up to dry that I said to my hubby, "I don't think that pasta making is going to become an obsession like bread making has....it's too time-consuming and tedius, and the results aren't that much better than store-bought." 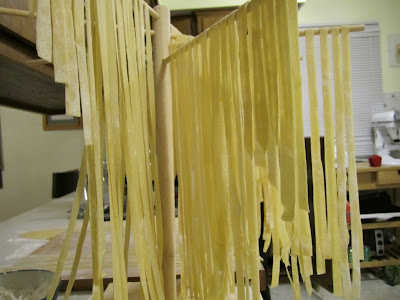 After an hour, I put the pasta into a glass jar and then into the fridge. 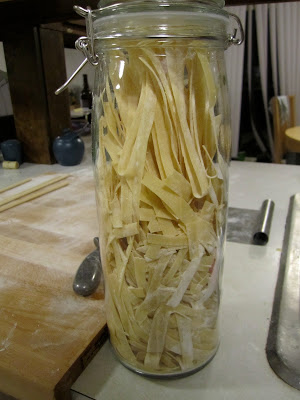 The next night, dinner was pretty easy. I boiled the pasta in a pot of salted water for about 2 or 3 minutes. I heated some of our favorite spaghetti sauce, which I'd had in the freezer downstairs. I used the pain a l'ancienne recipe from ABED to make garlic bread. (I actually made 6 loaves; we used 2 last night, but I turned them all into garlic bread and froze the other 4.) And we had cheesecake with strawberries for dessert. 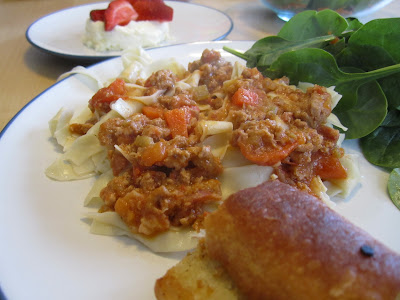 This pasta was awesome, by far the best I've ever made. With pasta this good, I can see why I would want to make homemade pasta frequently. I used the leftovers in my favorite chicken noodle soup recipe tonight...I don't think we'll be able to go back to the stuff from a box! 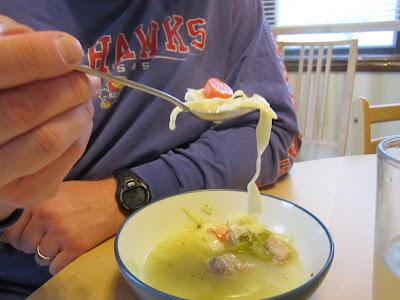