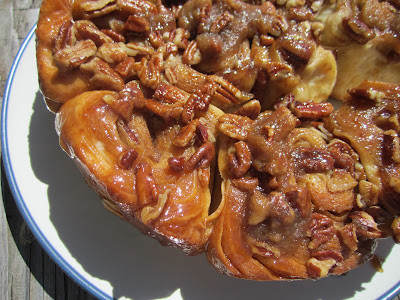 Our second May recipe for Tuesdays with Dorie is pecan sticky buns. I just knew these would be a hit in my family, and the recipe was perfectly timed for Mother's Day.

Unlike my usual cinnamon bun recipes which start with a sweet dough, these are made with brioche, an incredibly rich dough made with five eggs and a stick and a half of butter. The dough is mixed before the butter is added and it took forever for my butter to incorporate. But finally, using my mixer and a bit of hand kneading, the dough was ready to rise and then chill.

The next day, the dough is laminated, with another stick and a half of butter folded in. I actually only laminated half of the dough. I knew my kids wouldn't like the pecan sticky buns ("no nuts!"), so I used a quarter of the brioche dough to make plain ol' cinnamon buns for them (the other quarter is in the freezer to be used later). 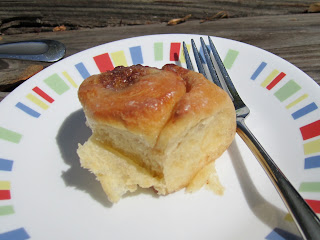 The dough was really easy to handle. Once it was chilled, I rolled it out and then topped it with sugar, cinnamon, brushed egg, and pecans. I used a little less butter than called for (there was so much!!) and a little extra cinnamon and sugar. Then I rolled up the dough into a jelly roll. The recipe says to freeze it before cutting, but my dough was still quite cool from the fridge, so I just used my normal dental floss technique to cut it and it worked just fine. 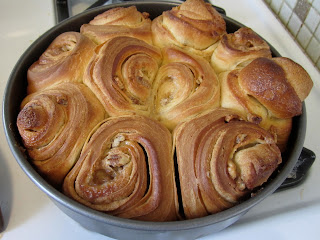 The texture of these was incredible: so light and fluffy. They weren't as sweet as our usual dough, and hubby and I didn't like them quite as much. Which is really quite a good thing, as they were a whole lot more work! Still, a delicious Mother's Day treat, enjoyed by all! :) 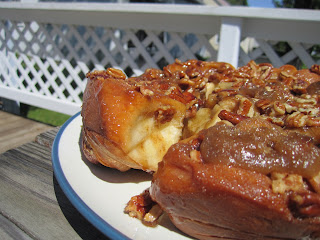 Check out the other TWDers' sticky buns here and check out the recipe in Baking with Julia, or on our hosts' blogs: Lynn of Eat Drink Man Woman Dogs Cat and Nicole of Cookies on Friday .