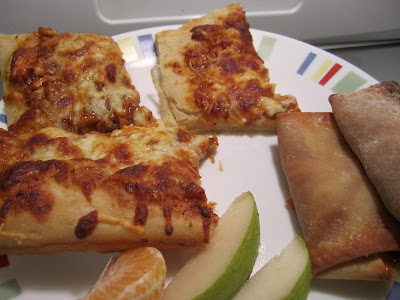 Our next chef-of-the-month, chosen by Peggy, was Sunny Anderson. She is another new-to-me chef, but I found many recipes on the Food Network site.

I decided to try Sunny's easy BBQ chicken pizza. After sampling the barbecue sauce, which had a bit of a kick, I knew the kiddos wouldn't eat it. I found a bit of extra pizza sauce in the fridge and used it to make 1/3 of a regular pizza with olives and pepperoni for them. And then, knowing I would have too much bbq chicken, I tried these buffalo chicken rolls that Tracey posted a while ago. I made 2/3 of a barbecue chicken pizza, 8 chicken rolls, and still had another cup of barbecue chicken to freeze for another bbq pizza on a night when we need a quick dinner.

I used my normal NM thin-crust pizza recipe, and this awesome new technique from KAF for rolling the pizza out. Have you ever tried to stretch out a pizza crust and had it shrink back? It happens to me all of the time, and it's so frustrating! This time, I oiled the pan as I always do, and then covered the dough with parchment paper and rolled the dough out. As the writers at KAF promised, the parchment prevented the dough from shrinking. Hurray!

We really enjoyed this pizza (and the chicken rolls, which were tasty and fun to make!).

1. Preheat oven to 500º.
2. Heat olive oil in a saucepan. Add onion and jalepeno and cook over medium heat for about 6 minutes, or until onions are softened and translucent.
3. Add paprika, cayenne, salt, pepper, and garlic, and cook 1 minute, or until fragrant.
4. Add ketchup, mustard, Worcestershire, brown sugar, and vinegar. Turn heat to medium-high and stir until combined.
5. Stir in chicken.
6. Roll out pizza dough on an oiled jelly roll pan. Cover with chicken. Add cheddar, Parmesan, and mozzarella. Bake for 10 minutes or until crust is baked through and cheese is bubbly and golden.
7. Allow to cool for a few minutes before serving.