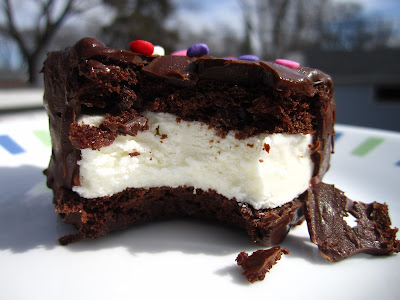 February and March are birthday-ful around here. All of the grandmas (my mom, my mother-in-law, and my stepmom) have birthdays within a few weeks of each other, and this year, we had a birthday dinner for one grandma on Saturday night and Nana's birthday brunch on Sunday morning. All of the grandmas love cheesecake and my stepmom, in particular, has a new fascination with limoncello. So when Natashya posted this recipe for limoncello cheesecake squares a couple of months ago, this year's birthday treat was a no-brainer; and since we were celebrating two birthdays in one weekend, I was able to make one pan of treats for both.

But I knew that, while this was a perfect grandma birthday treat, it would not be appealing or appropriate for the little ones, so I set out to find a fun and delicious birthday party treat for them. When my little guy turned five a few weeks ago, we got a bakery cake for the first time ever (eek! provided by the place where we had his party). But I wanted to make a little something for home, too. I had the idea of an ice cream cake, so I baked up a quarter-version of Dorie's perfect birthday cake in a mini-loaf pan, made a batch of lemon frozen yogurt, and layered the two together. And then I realized that the lemon curd I'd used in the frozen yogurt was way past it's prime, and I ended up having to throw it all away. It was very depressing. And I also realized that an ice cream cake should use a cake and ice cream with contrasting colors.

And then I re-stumbled upon this post from my friend Di for individual ice cream cakes, and I was sold.

For my version, I made a batch of peppermint ice cream. I used Jeni's vanilla ice cream recipe, but skipped the vanilla bean, and stirred in a teaspoon each of vanilla extract and peppermint extract at the end. After churning, I spread the ice cream on a half-sheet pan covered in parchment paper and set it in the deep freeze.

Then I made (as recommended by Di), Dorie's devil's food cake recipe from BFMYTY. I made a half-recipe, and somehow misread Di's instructions: she used a 9x13 pan, but I mistakenly thought she'd used a half-sheet pan. I thought the batter looked too thin when I spread it out, but I baked it anyway (it took about 15 minutes). This turned out to be a really happy mistake! It made a nice, thin cookie/cake layer that looked just like a real ice cream sandwich, and I thought the cake was in perfect proportion to the ice cream. Once the cake was cool in its pan, I added it to the deep freeze. 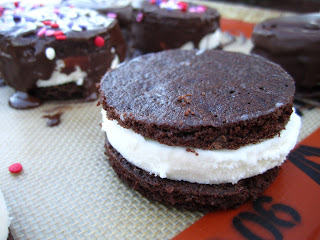 When it was time for assembly, I used a 2" biscuit cutter dipped in a bowl of hot water to cut out the cake circles and the ice cream circles. Then I used my mini heart cutter to make baby ice cream sandwiches out of the leftover pieces for the family to sample (since by that point, they were all sitting at the counter watching me and saying, "When can we eat these?!"). I stuck the assembled sandwiches back into the deep freeze.

Finally, I made a 1/2 batch of Jeni's chocolate bombe shell, and used that to coat the cold sandwiches. I scattered some sprinkles on top, and once more into the deep freeze until the party.

There were a lot of little steps, and this recipe definitely takes some serious planning to put together, but nothing was too difficult and the results were sooooo worth it! These little sandwiches were a huge hit with the kids and adults alike: they were so delicious and so fun to eat. They definitely go into my top five desserts I've ever made. I foresee many different variations in our future, although the peppermint-chocolate combination will be repeated as well!