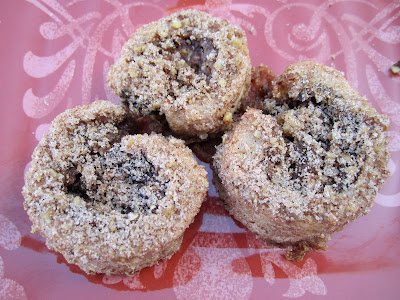 Our first Tuesdays with Dorie recipe for March is rugelach, hosted by Jessica of My Baking Heart and Margaret of The Urban Hiker. My hubby took one bite of the finished product and said, "It's like a cinnamon roll and a danish and a cookie and something else all mixed together, and it's just so good!"

I made a half-batch of dough early in the morning. It came together pretty quickly in my stand-mixer: softened butter, softened cream cheese, salt, sugar, and flour. Once it came together into a ball, I patted it into a rectangle and put it in the fridge to chill.

Then I made the lekva. We had the choice of prune or apricot lekva. I've never heard of lekva before, but apparently it's a Hungarian fruit butter. I really love prunes, and I'm not a big apricot fan, so this was an easy choice for me. The lekva was incredibly easy to make: prunes boiled in water and combined with sugar, lemon juice, and chopped walnuts. Okay, sounds pretty nothing-special, right? NO! I seriously could've eaten the entire bowl straight-up; it was that good!!

Late the same afternoon, I plumped up some dried cherries and chopped up some apricots, toasted some walnuts and pecans, and proceeded with shaping the rugelach.

I rolled the dough out into a large rectangle and cut it in half. My problems started after I spread it with the lekva and then began to sprinkle on the insane amounts of filling: fruit, nuts, sugar (I also sprinkled in some mini chocolate chips on half, at the kiddos' request). There was no way to roll these babies up! I did the best I could; one strip actually rolled okay. The other one began to tear and there was filling pouring out all over the place.

I chilled the rugelach for about six hours, then brushed them with the egg wash, sliced them, dipped them in the sugar-nut mixture, and baked them. Regardless of their looks, these were a big hit with the family! The little girl and I weren't huge fans of the dried fruit, but we all loved the combination of flavors from the prunes, nuts, and dough.

Check out everyone else's rugelach here!