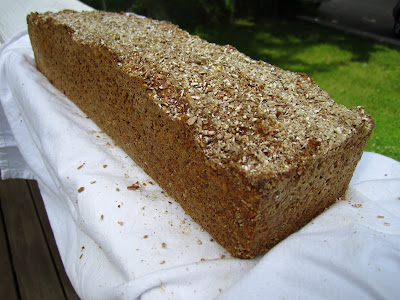 Here I am with the final Mellow Bakers bread for June: vollkornbrot, a dense sourdough rye bread with large amounts of whole grains.

This is one of those breads that makes a beginning(ish) bread baker like me a little nervous...made with coarse rye meal and sourdough starter, with no white flour or even whole wheat to lighten things up and only the teeniest tiniest bit of instant yeast to give it an extra push to rise. The dough barely moves and tends to look like paste...it requires pouring into the prepared pan, rather than shaping into a loaf. In fact, I debated skipping it. And then I thought about just scaling it way way down.

And then I thought, "Oh, what've I got to lose?!" and went ahead and made the whole nearly four-pound loaf. After all, this is my dad's favorite kind of bread, and JH says it keeps forever in the fridge, and if it turns out to be a nearly-inedible brick (like others' I've read about and like my own first experiences with 100% sourdough rye bread), well, it's only a little flour, right?

So after refreshing my starter and stopping at the co-op for rye meal and rye berries, I mixed up my sourdough: rye meal (coarse rye flour, aka pumpernickel flour), water, and mature sourdough culture. Then I mixed up my soaker of rye berries and water, forgetting that they only needed four hours of soaking and that it was getting pretty warm.

The first incident (because there's always an incident with me, isn't there?!) was when we opened the freezer and the bowl with the starter tumbled from the top of the fridge to the floor...thank goodness for sturdy glass bowls...no harm done.

I actually let my sourdough rise for 24 hours...my starter can be a little on the slow side, and I thought a little extra time wouldn't hurt anything. Sure enough, it was just about perfect, with a clear dome on top. Then I looked at my rye berries...and the white fuzz covering some of the top layer. Yep, too long, too moist, too warm: they were covered with mold. What to do?! I first posted for advice on the Mellow Bakers forum, then read some scary article about deathly fungus that can grow on rye plants, and then called my dad, who is my guru for all things nutrition and food related. I'd already scraped off the top layer and there was no visible mold anywhere else. I have a pretty sensitive nose and I couldn't smell it anywhere else in the bowl. And hubby and I both tasted a few berries; they tasted completely normal. My dad thought we'd probably be okay.

Moving right along...hubby and I chopped up the rest of the soaked rye berries to make rye chops. This was somewhat of a pain, especially given how many they were, but we managed. Then I mixed the rye chops with the sourdough, the rest of the rye meal, more water, salt, a tiny bit of instant yeast, and some sunflower seeds.

It was supposed to knead in my standmixer for ten minutes, but it was so paste-like that the dough hook kept pushing all the dough to the sides and then spinning around. So I mixed it by hand, folding the dough over on itself in the bowl for about ten minutes. There was no noticeable change. Then a twenty minute bulk proof right in the bowl.

I scraped the paste into my pullman pan, sprinkled rye meal on top of the dough, and covered it. I let it rise for about an hour, and was surprised to notice that it did, in fact, seem to rise a little. Then it baked for an hour and a half, and sat wrapped in a towel for a couple of days.

It seemed really hard when I tried to saw through it with a knife, but happily, the inside was moist and the crust was not too dense to chew. It was really interesting plain: you could taste all of the different grains. And it was actually pretty tasty with butter. In fact, I think it tastes like what it's supposed to taste like...imagine that! We're planning to eat some for sandwiches, and I'm hoping to get some cream cheese and cucumber for my favorite use of rye bread. Still waiting to get my dad's opinion on his half of the loaf...... After my recent tart crust near-disasters, I felt like I redeemed myself a bit to have conquered the vollkornbrot! =)

UPDATE: Dad, the rye lover, declared this bread absolutely fabulous. The half loaf that I gave him is already gone, enjoyed in thin slices with either butter or cream cheese.