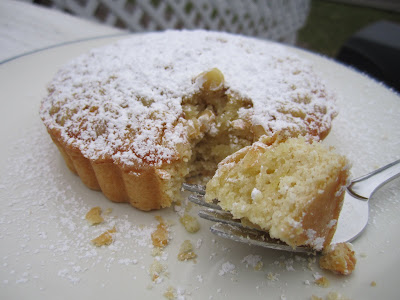 As I said yesterday, I baked two mini-tarts last night with my last two chunks of frozen sweet tart dough: we had the banana walnut tart for dessert last night, and it was okay. We saved the Roman almond and pine nut tart for breakfast this morning because NM says it is better served as a tea pastry than for dessert.

I thought this recipe had a weird ingredient list: almond paste, sugar, eggs, butter, vanilla, lemon zest, flour, and pine nuts. In fact, I wasn't even going to make it until Kayte (the official blogger for this recipe) said that it was her new favorite recipe from the book.

I've never cooked with almond paste before, and wasn't able to find it the last time I had a recipe that called for it. Luckily, I found it the other day, and picked up a tube. It was odd stuff, more solid than paste-y, but I chopped it up and gave it a whir in my stand mixer with some sugar. Then I added in the egg, butter, and the rest of the ingredients, plopped it in the mini-tart pan, and pressed a thin layer of pine nuts into the top. I baked it for about 24 minutes. (I made 1/4 recipe for my mini-tart pan, filled the pan pretty full, and had just a tiny bit of filling left over.)

I snuck a bite before giving it to hubby for his breakfast this morning...and then another...and then another. This tart was such a pleasant surprise: so incredibly yummy! I think it would be a fun addition to a brunch, and I'm definitely putting it on the make-again list!
Posted by Abby at 2:47 PM