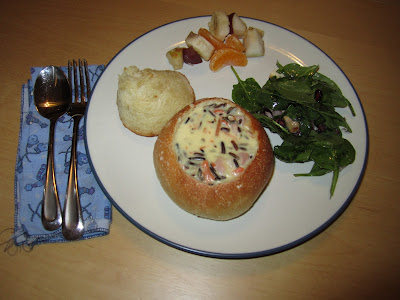 Ever since the kids were born and we committed to staying home for Christmas (we used to travel to my in-laws, but it's a treacherous drive through the mountains, so we only drive that way in the summer now), we've had the Christmas Eve tradition of ordering dinner in from my very favorite restaurant. It was a hole-in-the-wall, family-owned Chinese restaurant that my family has been going to since I was four years old. Sadly, this past year, the owners retired, sold the business, and the food isn't even close to what it once was.

We debated getting take-out from several other places for Christmas eve, especially since I decided to host Christmas dinner for the first time this year, but in the end, I decided I wanted to cook...just something simple.

I've been thinking about trying soup and bread bowls for a while now, and this seemed like the perfect opportunity.

Following Frieda's suggestion, I used Peter Reinhart's Italian bread recipe from the BBA. I divided the dough into 6 ounce portions and formed them into tight boules to try to encourage them to rise up instead of out. It worked nicely. 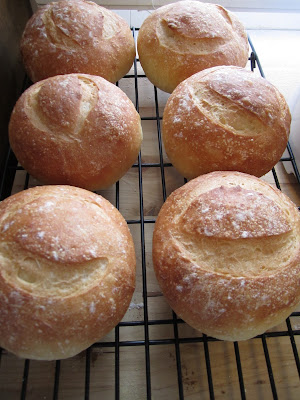 Before dinner, I cut out the tops of the bread bowls, and pushed in the sides to try to create a wide opening. Following Mags' suggestion, I brushed the insides with olive oil and toasted them at 350F for about ten minutes.

I was concerned that the 6 ounce bowls turned out pretty small and thought maybe I should make bigger ones next time. Buuuuut, I'm not sure. The bowls were small; I could only fit one small ladle of soup into each. But there was a perfect amount of bread. The guys just had second scoops of soup, so maybe that's the answer.

For the soup, I made Byerly's wild rice soup. The last step of the recipe is to add the cream and sherry and then serve. I found that the flavors didn't meld; next time, I think I will either make the soup ahead of time or cook it for longer.

Either way, it went perfectly with the bread bowls.

I was nervous that we wouldn't have enough food, as the soup recipe did not make much and the bread bowls were so small, so I decided to throw together a salad from some leftovers in the fridge. It was awesome! My dad requested the recipe, although I just kind of threw things together. This is my best guess: