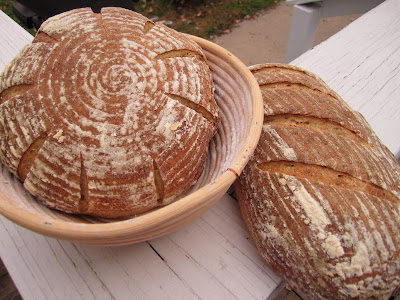 Nearly halfway through October, and I've finally made my first Mellow Bakers bread of the month. I know I'll make the challah (we are big lovers of French toast in this house, and challah is the perfect bread for that). Lastly, we have pretzels, which I'd love to make in the authentic way ~ but I'm nervous about Mr Hammelman's instructions to use lye, so we'll have to see what happens.

Anyway, the first bread of the month was roasted potato bread. I used Yukon golds, as recommended; they are our favorite kind of potatoes and we pretty much always have them on hand. I roasted them last night. The only complication was that I roasted about 12 ounces, which ended up cooking down to only 5 (the recipe called for 8), so I had to roast a second batch. No biggie; hubby enjoyed the leftovers! I also made the pre-ferment last night, which had developed nicely by late this morning.

All of the ingredients went into the mixer: bread flour, whole wheat flour, potatoes, water, salt, and instant yeast. Then I added the pre-ferment in chunks. The dough was perfect and seemed to behave just as it should. After an hour and a half (with a fold in the middle), I shaped it into an oval and a boule, and then left the house for a bit.

When I came back, at exactly the 75 minute mark (as I said, the dough had been behaving perfectly on schedule), I found two very clearly overproofed loaves. When I scored them, they instantly deflated and spread out. I was so bummed!

But all was not lost! They baked for about 34 minutes, and when I took them from the oven, even though there wasn't much oven spring, they had clearly rallied.

This bread was awesome. The flavor of the roasted potatoes really shines through. The kiddos both asked for seconds (the baby even asked for thirds) and hubby had even more. It was lovely with butter, as well as dipped into ATK's recent recipe for slow-cooker minestrone (which was, unfortunately, a little disappointing). A definite repeat! 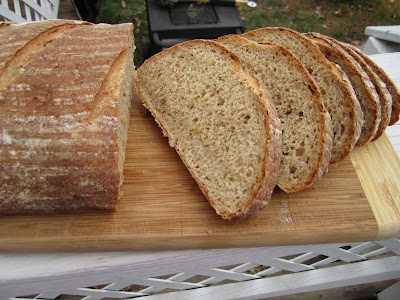